/NOT FOR DISTRIBUTION TO U.S. NEWSWIRE SERVICES OR DISSEMINATION IN OR INTO THE UNITED STATES/

TORONTO, Nov. 24, 2022 /CNW/ - Silver Mountain Resources Inc. (TSXV: AGMR) (OTCQB: AGMRF) (BVL: AGMR) (Silver Mountain, AGMR or the Company) is pleased to report on the status of its exploration campaign at the Company's Reliquias silver mine in Huancavelica, central Peru. The main focus of the 2022 work program is the investigation of the Reliquias silver-polymetallic deposit from existing underground workings. Since the start of the drill campaign in April of this year, 69 drill holes with a total meterage of more than 16,500 m have been completed (Fig.1). Most of the bore holes tested the three principal veins known at Reliquias, called Matacaballo, Sacasipuedes, and Meteysaca vein.1 Drill platforms were prepared in available mine workings, mostly on the lowest existing levels of the Reliquias mine (390 m and 415 m-levels). Drill holes predominantly targeted historic resource blocks defined by the previous operator, in close proximity to existing haulage levels. Visual observation of several drill holes designed to test the depth extension of the main structures showed that well-developed mineralization extends to at least 150 m below current mine levels (For a summary of reported drill intercepts, see Background Information below).

Over 5,000 drill core samples were collected so far, while multi-element assay results have been received for 2,810 samples. Approximately 2,200 drill core samples are still at the laboratory, with results expected to be released over the next 4-5 weeks. Additionally, various batches of samples were sent for determination of rock density, mineralogical studies, and for initial metallurgical tests.

To complement the drill campaign and to facilitate the conversion of additional historic resources into National Instrument 43-101 – Standards of Disclosure for Mineral Projects (NI 43-101) compliant resources, an extensive underground mapping and sampling program was initiated in June 2022. Several existing drifts, sublevels, and raises were mapped and systematically sampled in channels cut every 4 m across the exposed veins. So far, approximately 1,700 rock channel samples were sent for assaying, with results reported for 700 samples. The Company anticipates that the remaining geochemical results will be returned by the lab during the coming 4-5 weeks.

In August 2022, the Company decided to reallocate the exploration funds originally earmarked for a 13000-m surface drilling campaign. Instead, the ongoing underground drill program was increased from the originally planned 12000 m to approximately 17500 m. More drill holes were carried out to extend previously recognized mineralization in the main veins along strike. Additionally, several holes were added to the program to test the Pozo Rico, Perseguida, and Vulcano vein systems (Fig.1). The last two bore holes of this extended campaign will be collared from drill platform C12 and are expected to be completed by early December.

Furthermore, the redesigned work plan for H2 2022 included an increase in the underground channel sampling program. To allow the detailed evaluation of additional areas where well-developed mineralization has been indicated by historic drilling, the rehabilitation of historic mine workings was accelerated. In turn, this will also facilitate the mine development tasks in 2023, aiming for an expedited production start-up in late 2023.

Based on geological information compiled from all 2022 drill core as well as from the underground mapping, the preparation of lithological, mineralogical, and alteration models of the Reliquias deposit has started. Historical data available from previous project operators is also incorporated into the three-dimensional analysis of the main veins and several smaller structures or vein splays. This in-house geological model as well as all other relevant information (drill hole deviation measurements, topographic surveys, sample certificates, QA/QC procedures, etc.) will be reviewed by an independent consultant, starting this week. Work on an updated resource estimation is to commence in late November. The main objective of this review is to establish a NI 43-101 compliant mineral resource in Q1 2023 that will form the basis of our production decision in H2 2023. 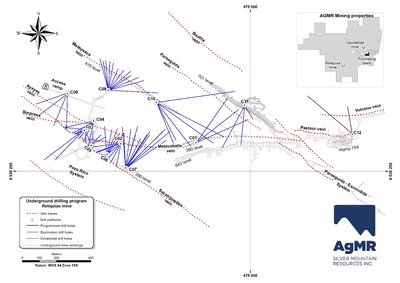 Since the start of historic mining operations at Reliquias, the Matacaballo vein has been one of the most important exploited structures due to its width and contained mineralization. In general, the Matacaballo vein displays a typical strike direction of 95°, dipping between 55° and 80° to the north. Its average width in recent drill holes and in exposures on lower mine levels is 1.50 m, with a maximum true width of 4.50 m. Additional vein splays, cymoid loops, as well as the development of narrow argillic alteration zones in the wall rocks with mineralized veinlets are typical for this structure.

The Sacasipuedes vein strikes predominantly in a NW-SE direction and dips approximately 80° to the northeast. Like all veins in the Castrovirreyna district, it shows a typical pinch-and-swell behaviour (rosary-style). Its average width is 1.00 m, reaching 2.00 m in certain zones. The Sacasipuedes vein is characterized by the injection of various pulses of quartz with disseminated sulphides, but locally displays hydrothermal brecciation as well. The alteration selvages around this vein are relatively narrow. Assay results available to date returned maximum values of 21 g/t Au, 269 g/t Ag, 14.7% Pb, 21.3% Zn, and 1.25 % Cu in individual drill core samples (see previous press releases).

The Meteysaca structure is on average narrower than the previously described veins, but relatively consistent in its width, with a range of 0.50 to 1.00 m. Its strike direction is NW-SE, typically around 125°, dipping steeply to the northeast. This vein exhibits brecciation, irregular banding and crustiform textures typical of intermediate sulphidation veins. Sulphide minerals are present as fine veinlets, semi-massive pods, or in disseminated form. Drill core results for the Meteysaca vein are still pending, but underground channel samples were reported for the 415 m level (see press release September 8, 2022). Maximum values for individual channel samples reached highs of 2,710 g/t Ag, 5.8 g/t Au, 17.6% Zn, 14.0 % Pb, and 1.3% Cu.

The principal veins of the Reliquias deposit commonly contain between 3% to over 25% sulphides, including tetrahedrite and other silver sulpho-salts, sphalerite, galena, chalcopyrite, and pyrite, within a matrix composed of at least three generations of quartz, rhodochrosite, with minor barite and calcite.

Other structures identified during the current drill campaign include the Sorpresa, Ayayay, and Pozo Rico vein. The Sorpresa and Ayayay veins are structures subparallel to the Sacasipuedes vein (Fig.1), displaying widths of 0.25 to 0.70 m. Both structures need to be better defined by additional infill drilling, but apparently, they unite with the Matacaballo vein at their southeastern end. The Pozo Rico vein system is a group of at least 4 structures to the southwest of the Sacasipuedes vein, which was previously mined to a limited extent, but which warrants more detailed exploration due to high-grade silver values reported by the previous operator on historic longitudinal sections.

The following table lists the assay results of selected mineralized intercepts encountered in drill holes during the ongoing campaign. All results shown here were reported in more detail in previous news releases (available on the Company's website: www.agmr.ca). 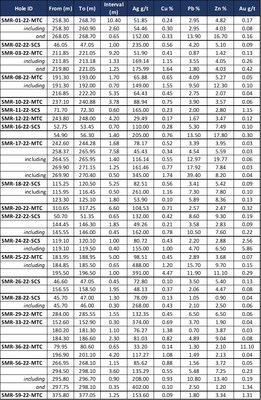 On Behalf of the Board of Directors of Silver Mountain Resources Inc.

The scientific and technical information contained in this news release has been reviewed and approved by Antonio Cruz, an independent consultant of the Company and a Qualified Person within the meaning of NI 43-101.

Silver Mountain Resources Inc. is a silver explorer and mine developer planning to restart production at the Reliquias underground mine and undertake exploration activities at its prospective silver camps at the Castrovirreyna Project in Huancavelica, Peru.

For further information about our drill program, including cross sections of the main veins with drill hole locations, please refer to our corporate presentation, available on our website at www.agmr.ca

Silver Mountain's subsidiary Sociedad Minera Reliquias S.A.C. owns 100% of its concessions and holds more than 35,000 hectares in the district of Castrovirreyna, Huancavelica, Peru.

Silver Mountain follows systematic and rigorous sampling and analytical protocols which meet industry standards. These protocols are summarized below.

All drill holes are diamond core holes with HQ or NQ core diameters. Drill core is collected at the underground drill site where recovery measurements are taken before the core is transported by truck to the core logging facility at the Caudalosa Grande mine camp, where it is photographed and geologically logged. The core is then cut in half with a diamond saw blade with half the sample retained in the core box for future reference and the other half placed into a pre-labelled plastic bag, sealed with a plastic zip tie, and identified with a unique sample number. The core is typically sampled over a 1-2 metre sample interval unless the geologist determines the presence of an important geological contact. The bagged samples are then stored in a secure area pending shipment to a certified laboratory sample preparation facility. Samples are sent by batch to the ALS laboratory in Lima for assay. Silver Mountain independently inserts certified control standards, fine and coarse blanks, and duplicates into the sample stream to monitor data quality. These standards are inserted blindly to the laboratory in the sample sequence prior to departure from the core storage facilities. At the laboratory, samples are dried, crushed, and pulverized and then analyzed using a fire assay-AA finish analysis for gold and a full multi-acid digestion with ICP-AES analysis for other elements. Samples with results that exceed maximum detection values for the main elements of interest (Ag, Zn, Pb, Cu) are re-analyzed using precise ore-grade ICP analytical techniques, while high gold values are re-analyzed by fire assay with a gravimetric finish. 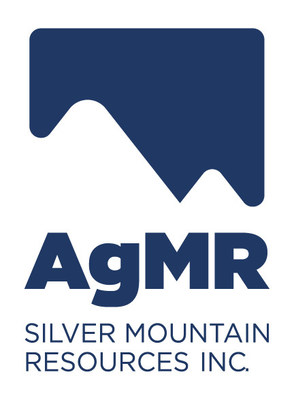 EQS-News: Most Active On The OTC Markets In September – A Look Back As October Comes To A Close