Farewell, July, it’s been a pleasure. Sentiment might finally be turning on Wall Street after the stock market recorded its best month since November 2020, buoyed by the tech giants better-than-expected quarterly results and the prospect of the Fed easing on future rate hikes.

The major indexes are still down for the year, but we’re clearly in the midst of a rally.

Where this rally will go is anyone’s guess. For now, Wall Street’s analysts are busy selecting the stocks they see as best positioned for gains going through the rest of 2H22. These ‘Top Picks’ are an interesting bunch, Buy-rated stocks with strong upside projected for all.

Does that make them the right stocks for a confused time? We can take a look at the latest details, drawn from the TipRanks database, and check in with recent analyst commentary, to find out. Each of these three stocks has been given a ‘Top Pick’ designation in recent weeks.

First on our list is TechnipFMC, a technology provider in the energy sector, serving both traditional producers and new energy customers. TechnipFMC delivers a wide range of fully integrated projects, products, and services, ranging from on-shore hydrocarbon exploration and extraction to off-shore rigs and platforms to petroleum refining. The company operates a fleet of 18 technically advanced oceangoing industrial vessels, has an active presence in 41 countries, and saw $6.4 billion in revenue in 2021.

A look at TechnipFMC’s revenues over the past two years shows a sharp drop from 4Q20 to 1Q21 – but that is an artifact of the company’s spinning off its petrochemical and liquified natural gas businesses into a separate company. Since the spin-off, revenues were stable between $1.53 and $1.68 billion. Until this past Q2.

For 2Q22, the company announced a top line of $1.72 billion, a sequential jump of 10% from 1Q22 and a more modest gain of 3% year-over-year. The increase in revenue was driven by solid gains in both main aspects of the business, including a 9.7% sequential gain in Subsea revenue and 13% sequential gain in the Surface Technologies segment.

Solid performance allowed the company to make improvements to capital structure, including a $530 million reduction in total debt, which now stands at $1.5 billion. The company claimed $684.9 million in cash and liquid assets at the end of the quarter. In addition to improving the balance sheet, the company also announced a $400 million share repurchase authorization, which translates to some 15% to the total outstanding shares. The authorization marks the beginning of a capital-return policy to shareholders.

In coverage for Piper Sandler, analyst Ian Macpherson points to increasing momentum in Subsea as a forward driver for FTI shares, writing, “After booking $1.9B in Q1, we have assumed avg $1.6B avg inbound for Q2- Q4, and would not be surprised to see our FY estimate of $6.7B eclipsed. The volume of work that FTI is no-bidding this year is unprecedented in the past decade. This in itself is a strong indicator of pricing power finally normalizing back to sustainable levels. That cyclical tailwind, when layered in with the embedded margin levers associated with FTI’s relentless business model innovation over the past 5 and past 1-2 years suggests reasonable upside to the recently outlined Subsea margin roadmap…”

Believing that this company will outperform going forward and bookings and business will increase, Macpherson keeps it as a ‘Top Pick,’ and rates the shares as Overweight (a Buy). His price target, at $14.65 in US currency, suggests a one-year upside of 81% in the coming year. (To watch Macpherson’s track record, click here.)

This player in the energy industry supporting cast has 4 recent analyst reviews on record, and they are unanimous that this is a stock to Buy, backing up the Strong Buy consensus rating. The shares are trading for $8.09 and their $11.91 average price target implies a 47% one-year gain. (See TechnipFMC’s stock forecast at TipRanks.) 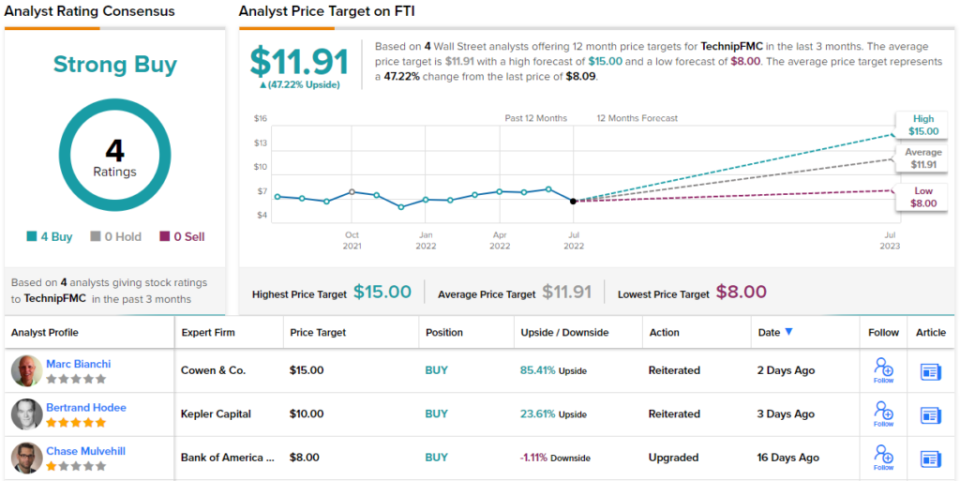 Next up on our list is Legend Biotech. This clinical-stage biopharmaceutical company is working on advanced cell therapies for the treatment of hematological and solid tumor cancers. This is a commonly trod path for biopharma firms; Legend is set apart by the advanced nature of its pipeline program, which currently features several Phase 2 and Phase 3 clinical trials. The company’s hematologic malignancy program is its most advanced, with no fewer than 6 late-stage trials underway.

On its clinical program, Legend made several important announcements in just this past June. The first of these announcements concerned a new program, LB1908, for which the FDA has just cleared the investigational new drug application (IND), thus clearing the way for a  Phase 1 clinical trial of LB1908 in the US. The drug candidate is a CAR-T therapy designed to attack relapsed or refractory gastric, esophageal, and pancreatic solid tumor cancers. A Phase 1 trial of this drug candidate is already ongoing in China.

In the second announcement, Legend released new data from its ongoing, large-scale CARTITUDE clinical trial program of ciltacabtagene autoleucel. This is a new treatment for the dangerous blood cancer multiple myeloma, which has no effective treatments and high unmet medical needs. The new data shows ‘deep and durable’ therapeutic responses among patients in several of the CARTITUDE trials, with an overall response rate of 98% after two years.

The most exciting development, however, was the FDA’s February approval of Carvykti, one of Legend’s new treatments for multiple myeloma. The FDA move was followed in May by approval from the European Commission to begin marketing activities. Carvykti is a BCMA-directed, genetically modified autologous T-cell immunotherapy, also called cilta-cel. Legend has an exclusive global licensing agreement with Janssen for the commercialization of Carvykti.

In addition to these clinical updates, Legend reported important financial results in the first quarter. These included revenues of $40.8 million, derived from development milestones in licensed research programs. Legend also has $796 million in cash and cash equivalents available, compared to Q1 R&D and G&A expenses of $94 million, giving the company a cash runway into 2024.

All of that was enough for BMO analyst Kostas Biliouris to make Legend one of his Top Picks in the biotech sector, and to set an Outperform (Buy) rating on the shares. His price target, of $77, implies a one-year upside of 63%.

Once again, we’re looking at a stock with a unanimous Strong Buy consensus rating; Legend has received 4 positive analyst reviews recently. LEGN shares have an average price target of $72, indicating a 52% upside from the current trading price of $47.24. (See Legend’s stock forecast at TipRanks.) 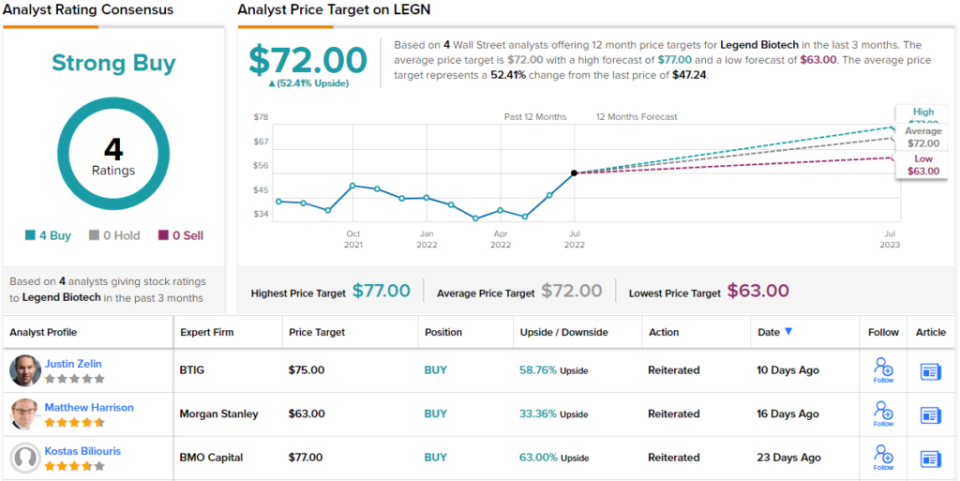 The last stock we’ll look at here is AvePoint, one of the software industry’s major players. The company offers a cloud-based SaaS platform providing solutions for data migration, management, and protection in conjunction with Microsoft 365. The New Jersey-based company was founded in 2001 and has adapted as the computing environment has changed over the years, expanding its range of software products and solutions.

Looking at some numbers, AvePoint boasts that it has managed over 125 petabytes of data, and that its most recent quarter, 1Q22, showed 45% SaaS revenue growth and 30% annual recurring revenue (ARR) growth, to a total of $167.4 million.

The company’s boost in SaaS revenue brought that segment’s total to $26.6 million in Q1, out of a total of $50.3 million at the top line. While revenues were on the way up, earnings came in negative, with a 6-cent diluted EPS loss, although this compared favorably to the year-ago quarter, when the EPS loss came in at 14 cents. AvePoint has a sound cash holdings, with $260 million in cash and short-term investments available.

5-star analyst Nehal Chokshi, of Northland Capital Markets, selected this stock as a Top Pick after a deep dive into the company’s performance. He is impressed by AvePoint’s forward potential, writing, “We view our new long term revenue CAGR of 25% as very conservative given our initiation work highlighting a highly differentiated capability relative to primary co-opetive player MSFT and that our work that verifies AVPT is addressing the full $6.5B TAM identified…. Other key parameters in our DCF include a 30% non-GAAP OM, which is 500 bp above the low end of management’s 25%+ guidance but is consistent with the 30%+ terminal OM we assume with other high quality SaaS names under coverage…”

These comments support Chokshi’s Outperform (Buy) rating, while his $12 price target implies a 138% upside in the next 12 months. (To watch Chokshi’s track record, click here.)

Both of the recent analyst reviews on this stock are positive, making the Moderate Buy consensus rating unanimous. The shares are selling for $5.03 and their $9.50 average price target suggests an upside of 89% this year. (See AvePoint’s stock forecast at TipRanks.)