TORONTO, ON / ACCESSWIRE / September 28, 2022 / Aston Bay Holdings Ltd. (TSXV:BAY)(OTCQB:ATBHF) ("Aston Bay" or the "Company") today reported that initial assay results from drill hole ST22-10 have confirmed a significant discovery from the summer drill program at the Storm Copper Project ("Storm" or the "Project") on Somerset Island, Nunavut, Canada. This is the maiden drilling program for American West Metals Limited ("American West"), who are the project operator, since entering an option agreement with Aston Bay in March 2021.

"We are excited the assay results from drill hole ST22-10 have confirmed the presence of sediment hosted type of copper and zinc mineralization at the Storm Project," stated Thomas Ullrich, CEO of Aston Bay. "This style of mineralization, with its potential to host giant copper deposits such as those in Central Africa, has always been our target for discovery on Somerset Island.

"The visual logging shows the presence of sulfide minerals chalcopyrite, pyrite and sphalerite, which are extremely significant as it demonstrates movement of metal-bearing fluids through a thick permeable horizon. Elsewhere at Storm, including the nearby 4100N Zone, the chalcopyrite/pyrite/sphalerite mineralization occurs on the margin of much higher-grade chalcocite and bornite zone. This drill hole pierced the edge of a large conductive anomaly, so considerable discovery upside exists here and at the six other large anomalies that have yet to be tested.

"We now have two avenues for growth at the project: advancing the high-grade near-surface copper mineralization at Storm toward a maiden resource for a low cost, small footprint direct shipping product mining operation, and continued exploration for the potential discovery of a very large sediment hosted style of mineralization hidden in the subsurface."

Drill hole ST22-10 intersected a thick sequence of sulfide mineralization hosted within carbonate sediments. The drill hole was targeting a large electromagnetic (EM) anomaly to the west, and deeper than the near-surface high-grade 4100N Zone.

Approximately 68.8 metres (m) of chalcopyrite, pyrite and sphalerite mineralization were intersected from 277m downhole in drill hole ST22-10 (approx. 230m vertical depth). The mineralization is interpreted to be stratabound and is hosted within a vuggy, bituminous and fossiliferous carbonate unit.

Visual observations of chalcopyrite and sphalerite in the drill core have now been confirmed by assays within the sampled intervals from ST22-10.

Of the sulfide mineralized zones, only portions containing clear and abundant chalcopyrite and sphalerite were sampled with the aim of confirming sediment hosted copper and zinc mineralization. Most of the pyrite-dominant zones were excluded from samples submitted for assay - see Table 1 for assay results and Figure 3 for a geological cross section of the drill hole. These results confirm the presence of sediment hosted copper and zinc sulfide mineralization and have verified the discovery of this new style of mineralization at Storm.

Geophysical properties logging of sections of the core will be conducted on ST22-10 to refine the geophysical targeting model for follow-up drilling.

ST22-10 is the deepest drill hole completed at the Storm Project this season and highlights the outstanding exploration potential of the project area. Compilation of historical induced polarization (IP), gravity and EM data reveals a series of large anomalies that sit below, and/or adjacent to the known near-surface high-grade copper mineralization and graben fault system.

The metal associations, zonation and geophysics suggest that the drill hole has intersected the edge of a new and significant mineralization system.

ST22-10 targeted the margin of a large (300m x 800m), previously untested EM anomaly. The hole was drilled to a downhole depth of 382.6m and intersected both a shallow zone and deep zone of visual copper and zinc mineralization.

The drill hole was terminated prematurely due to a mechanical failure, with the deeper mineralized zone still open at depth.

The shallow mineralized zone within ST22-10 consists of 34m of weak vein style, fracture hosted and minor blebby chalcocite over a number of intervals from 17m downhole. The assays also indicate the presence of sphalerite (zinc sulfide) up to 1.05% Zn in places, and minor galena (lead sulfide).

The deeper zone of mineralization is over 68m thick and remains open at depth. The mineralization consists of vug, open pore space and breccia filling as well as replacement style pyrite ± chalcopyrite ± sphalerite sulfide mineralization superimposed on pre-existing hydrocarbon rich sediments. This mineralization is interpreted to be of the sediment hosted style, and distinctly different than the fault zone breccia hosted copper mineralization intersected at the 2750N and 2200N Zones at Storm.

Assays up to 0.44% copper (Cu) confirm the presence of chalcopyrite within the lower mineralized sequence. Zinc mineralization has also been confirmed in the lower part of the sequence with sphalerite accompanied by pyrite and calcite within bituminous vugs.

Mineralization at the nearby 4100N Zone and elsewhere at Storm is clearly zoned, with a core of chalcocite mineralization grading into zones bornite ± covellite, then chalcopyrite, pyrite and on to an outer sphalerite ± galena zone, reflecting progressive reduction of the metal-bearing fluids by interaction with hydrocarbons in the permeable zones of the rock.

The mineralization encountered in ST22-10 suggests this drill hole intercepted the outer chalcopyrite/pyrite/sphalerite zone of the system. Follow-up detailed EM is expected to improve targeting for the higher-grade chalcocite and bornite zones predicted by the deposit and mineralization models. 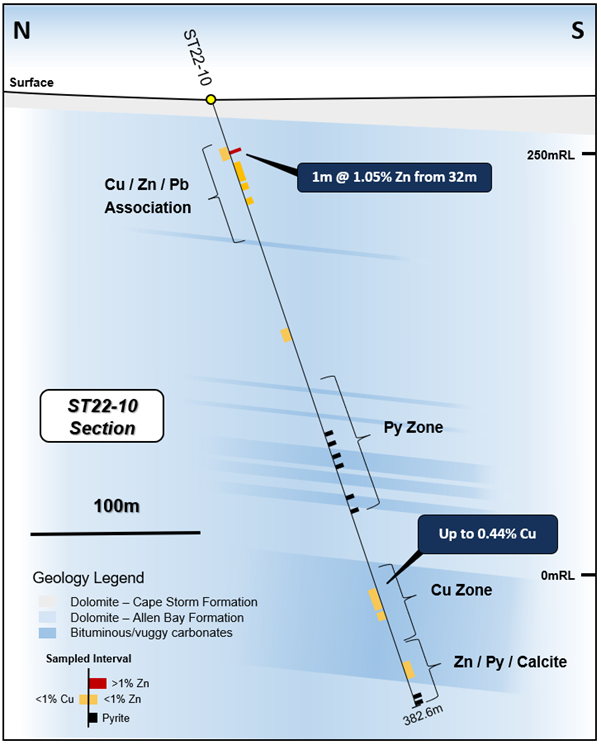 Figure 3: Schematic geological section of drill hole ST22-10 along 464315E. Only selective sample were taken down hole to verify the type of mineralization prior to further sampling.

Initial observations suggest that the style of mineralization, host rocks and the geological setting of the ST22-10 area are evidence of a reduced facies type of sediment hosted copper system. Global examples of these are the giant Kupferschiefer (Germany) and Central African copper deposits.

The geology intersected within ST22-10 has all the elements required for sediment hosted ore forming processes including permeable carbonate rocks, hydrocarbons for reducing fluids, sulphur source and a favourable structural setting. The central graben of the Storm area is an ideal trap for metal bearing fluids and will be a key focus for further exploration. 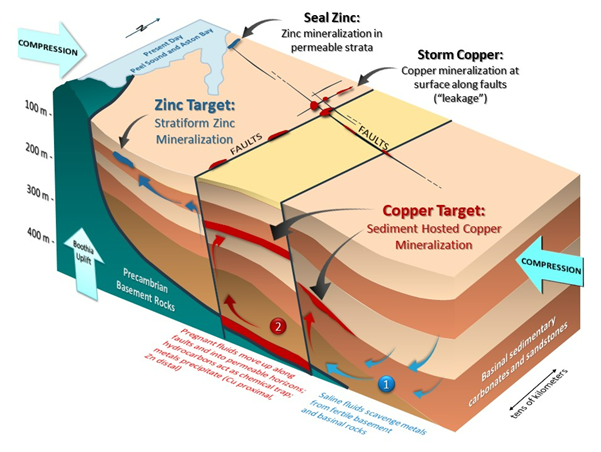 Beneficiation test work is expected to commence shortly with a focus on further optimization of the process to produce a direct shipping product. All of the remaining drill core (half core) from drill hole ST22-02 will be used in the test work.

Further diamond drilling and surface electromagnetics are planned for next year to follow-up the new deeper discovery as well as the shallow mineralization at the 2750N Zone. The drilling will also aim to define initial resources at the 4100N and 2200N Zones, where thick zones of high-grade copper mineralization have been intersected at shallow depths in historical drilling.

A detailed review of the existing induced polarization (IP) and gravity anomalies is underway (Figure 5). The current datasets show a number of large anomalies that are focused around the central graben faults and sit beneath high-grade surface mineralization; these present compelling targets for further exploration.

Investors can expect further news on the 2750N Zone drilling in the coming days. 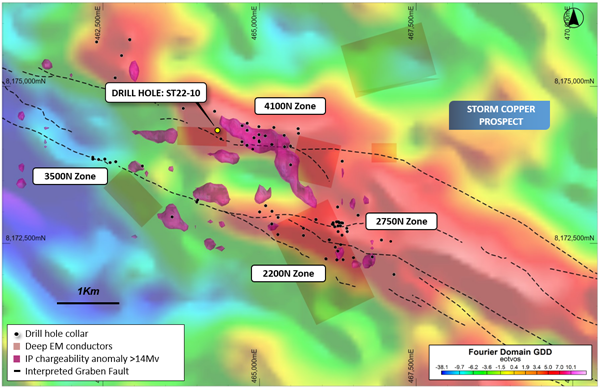 Table 1: Summary of significant drilling intersections for drill hole ST22-10 (>0.1% Cu, >0.01 Zn) Note - these cut-off grades reflect the exploratory nature of the drilling and are designed to indicate anomalous values.

About the Storm Copper and Seal Zinc-Silver Projects, Nunavut

The Nunavut property consists of 117 contiguous mining claims and six prospecting permits covering an area of approximately 302,725 hectares on Somerset Island, Nunavut, Canada. The Storm Project comprises both the Storm Copper Project, a high-grade sediment hosted copper discovery (intersections including 110m* @ 2.45% Cu from surface and 56.3m* @ 3.07% Cu from 12.2m) as well as the Seal Zinc Deposit (intersections including 14.4m* @ 10.58% Zn, 28.7g/t Ag from 51.8m and 22.3m* @ 23% Zn, 5.1g/t Ag from 101.5m). Additionally, there are numerous underexplored targets within the 120-kilometre strike length of the mineralized trend, including the Tornado copper prospect where 10 grab samples yielded >1% Cu up to 32% Cu in gossans.

*Stated drill hole intersections are all core length, and true width is expected to be 60% to 95% of core length. 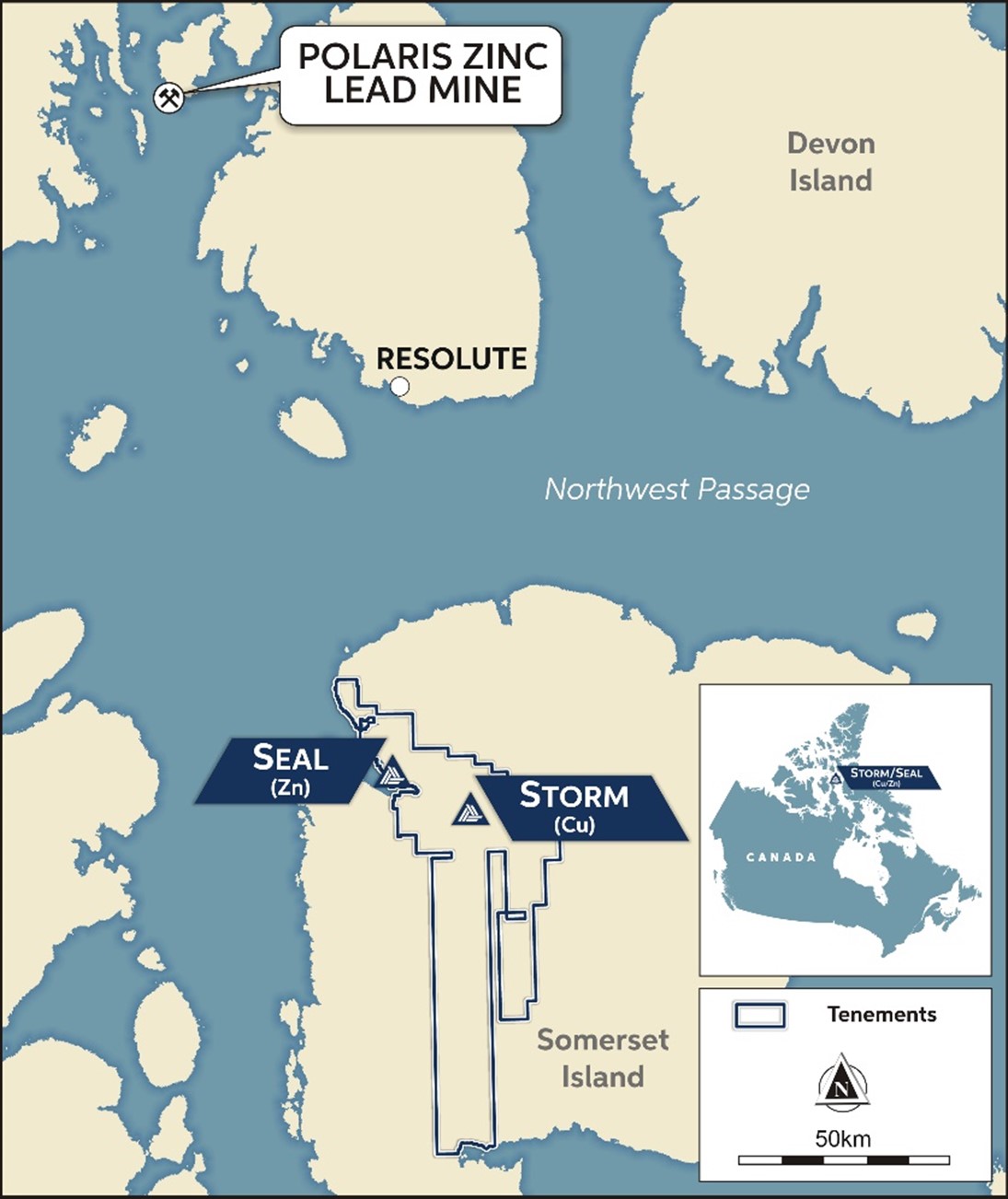 The analytical work reported on herein was performed by ALS Global ("ALS"), Vancouver Canada. ALS is an ISO-IEC 17025:2017 and ISO 9001:2015 accredited geoanalytical laboratory and is independent of Aston Bay Holdings Ltd., American West Metals Limited, and the QP. Drill core samples were subject to crushing at a minimum of 70% passing 2 mm, followed by pulverizing of a 250-gram split to 85% passing 75 microns. Samples were subject to 33 element geochemistry by four-acid digestion and inductively coupled plasma atomic emission spectroscopy (ICP-AES) to determine concentrations of copper, silver, lead, zinc, and other elements (ALS Method ME-ICP61a). Overlimit values for copper (>10%) and were analyzed via four-acid digestion and ICP-AES (ALS Method Cu-OG62).

Michael Dufresne, M.Sc., P.Geol., P.Geo., is a qualified person as defined by National Instrument 43-101 and has reviewed and approved the scientific and technical information in this press release.

Aston Bay is a publicly traded mineral exploration company exploring for base metals and gold deposits in Virginia, USA, and Nunavut, Canada. The Company is led by CEO Thomas Ullrich with exploration in Virginia directed by the Company's advisor, Don Taylor, the 2018 Thayer Lindsley Award winner for his discovery of the Taylor Pb-Zn-Ag Deposit in Arizona. The Company is currently drilling the Mountain Base Metals Project in Virginia, exploring the Buckingham Gold Project, also in Virginia, and is in advanced stages of negotiation on other lands in the area.

The Company is also 100% owner of the Storm Project property, which hosts the Storm Copper Project and the Seal Zinc Deposit and has been optioned to American West Metals Limited.

AMERICAN WEST METALS LIMITED (ASX: AW1) is an Australian company focused on growth through the discovery and development of major base metal mineral deposits in Tier 1 jurisdictions of North America.

They are a progressive mining company focused on developing mines that have a low-footprint and support the global energy transformation.

Their portfolio of copper and zinc projects include significant existing mineral resource inventories and high-grade mineralization that can generate robust mining proposals. The company is commitment to the ethical extraction and processing of minerals and making a meaningful contribution to the communities where our projects are located.

The company is led by a highly experienced leadership team, with strategic initiatives that lay the foundation for a sustainable business which aims to deliver high-multiplier returns on shareholder investment and economic benefits to all stakeholders.For further information on American West, visit: www.americanwestmetals.com.