Welcome to The Interchange! If you received this in your inbox, thank you for signing up and your vote of confidence. If you’re reading this as a post on our site, sign up here so you can receive it directly in the future. Every week, I’ll take a look at the hottest fintech news of the previous week. This will include everything from funding rounds to trends to an analysis of a particular space to hot takes on a particular company or phenomenon. There’s a lot of fintech news out there and it’s my job to stay on top of it — and make sense of it — so you can stay in the know. — Mary Ann

In 2020, historically low interest rates led to a surge in both rates and purchases. Existing home buyers rushed to alter the terms of their loans and aspiring home buyers took advantage of those low rates to purchase homes. Factor in that more people were spending more time at home than ever due to COVID shelter-in-place orders, home took on new meaning. Suddenly, many needed more space. Others took advantage of new remote work policies and being constrained by commutes to relocate to new homes.

This led to a boom in business for startups catering to home buyers. Companies (like digital mortgage lender Better.com) couldn’t keep up and had to go on a hiring spree to meet all the consumer demand. Venture dollars flowed into proptech after proptech.

Mortgage interest rates, which began their ascent in 2021, continued to climb...significantly. Prospective home buyers, turned off by the rate surge as well as the competitive and overheated housing markets, began to reconsider their plans, as buying was suddenly far less appealing. At the same time, as the venture market slowed dramatically and suddenly, raising capital was much harder.

Layoffs in the sector began — and they took place in a range of real estate tech companies, big and small. Digital mortgage lender Better.com conducted its first of four layoffs in the past nine months on December 1, 2021. Its fourth layoff was scheduled to take place last week before news of it leaked to some employees, and the media. (You can read my story on that here).

And, real estate tech startup Reali announced last week that it had begun a shutdown and would be laying off most of its workforce on September 9.

In a press release, co-founder and chairman Amit Haller said “the challenging real estate and financial market conditions and unfavorable capital-raising environment” led to the decision to wind down operations.

“Reali was one of the pioneering companies to offer the ‘buy before you sell’ and ‘cash offer’ programs to homeowners,” he said in the release. “We believed deeply in benefiting the consumer foremost in every transaction.”

Readers reacted with shock that a company could burn through so much cash, so fast.

Indeed, a little birdie told me that six-year-old Reali had been burning through cash and is in debt as it tries to sell off parts of its business. The company did not respond to my requests for comment.

Now, to be fair, Reali and Better.com aren’t the only ones facing challenges in the real estate tech world. Earlier this month, another "buy before you sell" startup Homeward laid off 20% of its staff. And Redfin and Compass let go of a combined 900+ people in mid-June. In February, online brokerage Homie laid off about one-third of its staff, or some 90 to 100 people.

While Better.com and Reali aren’t in the same exact space, they both cater(ed) to home buyers. And they both apparently burned a lot of cash in 2021. In case you missed it, Better.com CEO Vishal Garg was recorded — in a meeting held after the company’s first round of layoffs last year — saying: “Today we acknowledge that we over hired, and hired the wrong people. And in doing that we failed. I failed. I was not disciplined over the past 18 months. We made $250 million last year, and you know what, we probably pissed away $200 million.”

Frankly, it’s both mind-blowing and offensive to hear of companies that can blow through enough cash to help millions of people in need like it’s nothing.

Personally, I’m all about the lean-and-mean mentality. Operate capital efficiently all the time, downturn or no downturn, and you won’t be as panicked and sinking when the going gets tough. That means not hiring for the sake of hiring, thinking long-term and not spending like there's no tomorrow.

More fintechs are focusing on nonprofits

Last week, I came across, or was pitched, several tidbits of news that made me realize that an increasing number of fintech companies are launching products to help nonprofits and charities more efficiently move, raise and distribute more money.

First up, fintech startups Highnote and GiveCard said they are partnering to help nonprofits, shelters and governments issue prepaid debit cards to the “financially vulnerable” communities they serve. Via email, they told me: “Studies show direct cash payments can put people on a path to permanent housing and end their reliance on predatory lenders. But buying a bunch of prepaid debit cards from the local corner store and then surveying the recipients every week to see if it's helping isn't a scalable solution, and the lack of data is a major reason why city governments are reluctant to fund it. The tech behind Highnote allows GiveCard to rapidly deploy cards to its network of nonprofits and collect enough top-level anonymized data to figure out whether the programs are working, and whether the amount or the frequency of the payments needs to be adjusted, opening the possibility for more city governments to start adopting these programs.”

Los Angeles–based B Generous, a self-described “fintech for good” platform, has launched Donate Now, Pay Later (DNPL), a new tool it says allows donors “to make contributions to their favorite nonprofits through a proprietary philanthropic credit product called a Point of Donation Loan™ (PoDL). Using Donate Now, Pay Later™, B Generous says the nonprofit receives the donation immediately, and the donor gets the tax receipt right away, but the donor pays nothing out of pocket at the point of donation and instead pays over time, with no interest, costs or fees.” The goal, it says, is to increase average donation values for nonprofits.

It's not only startups getting in the nonprofit space. TC’s Sarah Perez reports that “PayPal is expanding further into the charitable donations business with its August 25 launch of support for Grant Payments. The new product has been created in partnership with National Philanthropic Trust (NPT) and Vanguard Charitable and allows Donor-Advised Fund (DAF) sponsors, community foundations and other grantmakers to move their donations electronically through PayPal’s platform.” Notably, Sarah adds that PayPal cited “a sizable market in charitable giving as a reason for entering this space with a new product.”

Fintech for good? Love it. 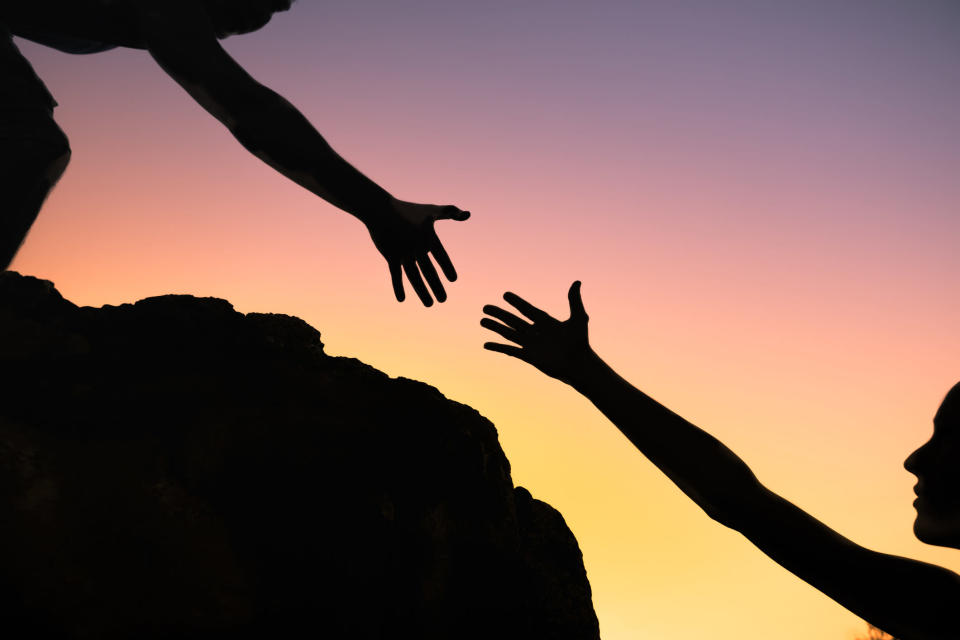 Climber giving another climber a helping hand up to the top of a rock.

Within half a year of going to market with its bill pay feature, Ramp went from launch to more than $1 billion in annualized bill pay volume, according to co-founder and CEO Eric Glyman. Last week, he told me that Ramp has now added financing and overlay to its bill pay product with a new offering called Flex. With the new Flex feature, customers will have the option “in one click” to add financing to pay the money back up to 30, 60 or 90 days later for a fee while the vendor “gets paid right away.” Besides the extra time, bill pay gives the business the flexibility to pay any way they wish or the vendor requires, including via ACH, check or card. Read more, by me, here.

Natasha Mascarenhas broke the news that Argyle, which at one point aimed to be the "Plaid for employment records," has laid off 6.5% of its staff — five months after raising a $55 million Series B. The company blamed the decision on a move upstream to serve more enterprise customers rather than SMBs (sound familiar? Ahem, Brex). Yet, it’s still hiring. Confused? So were we. But we can only infer that it needs to hire more people with enterprise experience and let go of those with smaller company–focused skill sets.

News that T. Rowe Price cut the value of its stake in fintech giant Stripe made headlines last week, the new data point coming in the wake of similar cuts by other investment houses regarding their ownership in late-stage startups. However, while it is true that T. Rowe Price reduced the value of its stake in Stripe, part of its Global Technology Fund, the latest reduction in its worth is not unique. Not only has Fidelity disclosed that it now values its Stripe shares at a discount to prior marks, but the latest T. Rowe Price news also comes after a similar cut in March. But the company is not the only fintech under pressure, Alex Wilhelm and I write in this piece. Meanwhile, at least one VC wants to cash in on Stripe's lowered valuation. Homebrew's Hunter Walk tweeted: "pls let me know if you find anyone selling preferred shares at this latest valuation because I'd like to purchase."

“Google Wallet is now available in South Africa, the first market for this product in Africa, to make it easy for users to save and easily and securely access their payment cards, loyalty cards and boarding passes,” reported Annie Njanja.

MANTL, a provider of account origination solutions, has partnered with Alliant Credit Union — a $17 billion digital financial institution — to expand into the credit union market with MANTL for Credit Unions. Via email, the company said the software was designed to improve application conversion rates and reduce the time to open new or additional accounts. 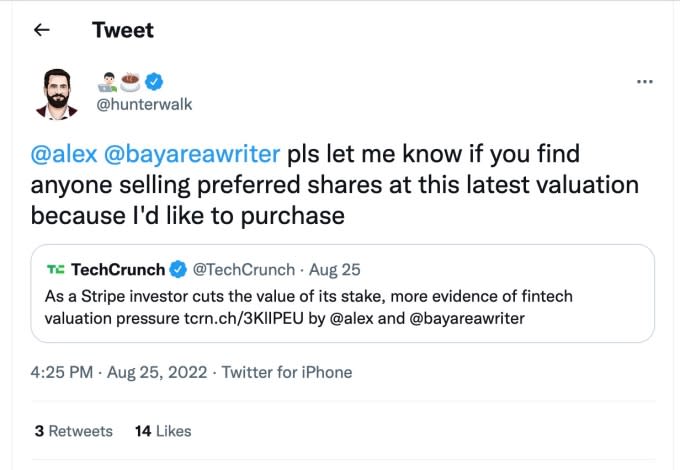 In addition to hearing from these leaders, you can get your how-to on over at the TechCrunch+ stage, check out roundtable discussions and breakout sessions. Whatever you do, start planning your schedule now so you don’t miss a lick of all this startup goodness.  Register before September 16 and save $1,100. This will be my first Disrupt and I am beyond excited!

That's it for this week. Thanks for joining me on this wild fintech ride. See you next week! xoxo, Mary Ann

CTO Realty Growth Announces Acquisition of The Collection At Forsyth in Atlanta, Georgia for $96.0 Million