The Euro is trading lower against the U.S. Dollar early Tuesday after giving up most of its intraday gains into the close the previous session. The price action suggests the single-currency is going to have a hard time gaining traction along as it continues to face event risk from the upcoming French presidential election and the on-going war between Russia and Ukraine.

Although the EUR/USD snapped a seven-day losing streak against the U.S. currency on Monday, there were no signs of buyers early Tuesday, which suggests the previous day’s rally was likely fueled by short-covering.

On Monday, the Euro rallied after French leader Emmanuel Macron beat far-right challenger Marine Le Pen in the first round of presidential voting. Nonetheless, the race is still too close to call with Macron facing Le Pen in what promises to be a tightly fought French presidential election runoff on April 24.

Meanwhile, the U.S. Dollar continued to be underpinned by U.S. Treasury yields which have soared on expectations of more aggressive tightening by the Federal Reserve. 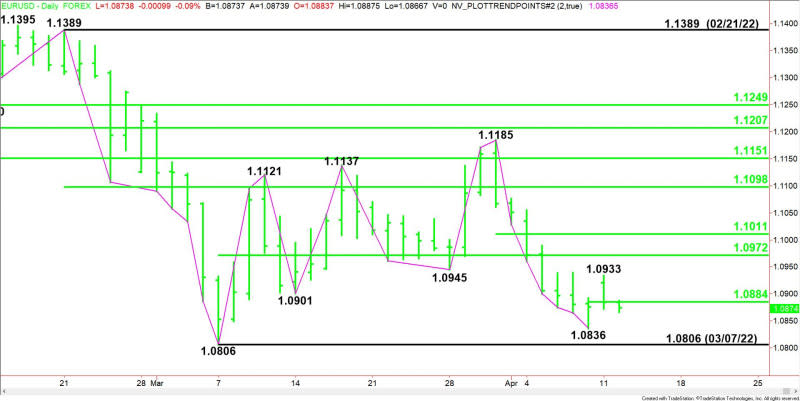 The main trend is down according to the daily swing chart. A trade through 1.0836 will signal a resumption of the uptrend. A move through 1.1185 will change the main trend to up. This is highly unlikely, but there is room for a normal 50% to 61.8% retracement of the recent sell-off.

The direction of the EUR/USD on Tuesday is likely to be determined by trader reaction to the pivot at 1.0884.

A sustained move under 1.0884 will indicate the presence of sellers. If this move creates enough downside momentum then look for a test of the minor bottom at 1.0836. Taking out this level could drive the EUR/USD into the March 7 main bottom at 1.0806.

A sustained move over 1.0884 will signal the presence of buyers. If this generates enough upside momentum then look for a surge into the minor top at 1.0933. Taking out this level will shift momentum to the upside, which could help drive the common currency into the 50% level at 1.0972.

For a look at all of today’s economic events, check out our economic calendar.

This article was originally posted on FX Empire