The US stock market is starting to strike some observers as overvalued. For the past three years, it has brought in double-digit returns, and the sustained bullish run has prompted some use of the ‘b’ word, bubble. But a new report from Goldman Sachs, analyzing the situation, suggests that investors should stay the course with US stocks.

Sharmin Mossavar-Rahmani, the firm’s CIO for Consumer and Wealth Management, acknowledges that valuations are high, perhaps even echoing the burst of the doc.com bubble 20 years ago, but says, “Using valuation as a signal to get out of equities is actually not effective.”

She points out that the S&P 500 index, over the past several years, has generated a 133% return, and rallied in 2021 despite already high valuations. In her view, investors will risk missing out on additional gains if they let the bubble worries get the better of them. And finally, despite a superficial similarity to the market collapse of 2000, Mossavar-Rahmani points out, “This bull market has not been driven by only a handful of stocks. Returns were much more skewed in 1999 than in 2021.”

The firm’s stock analysts are running with that call, pointing out equities they see as winners in the current environment. In the Goldman view, these stocks have better than 40% upside in store for the year ahead. Let’s see how that stacks up with the latest TipRanks data.

The first stock on Goldman Sachs' radar is Thoughtworks, a digital tech consulting company. This agency helps its clients respond to changing business conditions, mine the best value out of data assets, develop adaptable tech platforms, and deliver high-end digital products and experiences. Thoughtworks has been at the forefront of digital consulting for nearly 30 years, and at the end of last summer the company held its IPO.

The initial offering saw the company put over 16.4 million shares on the market at $21 each. That was above the expected pricing of $18 to $20. Thoughtworks raised a $344 million in the IPO, and today the stock commands a market cap of $6.8 billion.

While Thoughtworks has only recently gone public, and so does not have a long record of public financial reports, it did make its first such release in November of last year. The 3Q21 report showed $285.1 million at the top line, up 45% from the year-ago quarter. Per share, earnings came in at 14 cents, a solid result which, according to the company, was up from 8 cents in the prior year. The company reported a free cash flow of $27.5 million.

These facts lie behind analyst Brian Essex's optimistic view of the company. In his coverage for Goldman Sachs, Essex sees Thoughtworks holding a strong position for long-term growth.

“Within our coverage universe, TWKS remains the best positioned to benefit from ongoing strength of Digital Consulting and Engineering demand expected across the industry…. TWKS had a stronger than expected 3Q with accelerating growth and beat and raise results. However, the stock has underperformed the peer group over the past few months... We believe TWKS can narrow the valuation gap with execution," Essex noted.

In its short time as a public company Thoughtworks has picked up 6 share reviews which break down 4 to 2 in favor of the Buys over Holds, for a Moderate Buy consensus view. The stock is selling for $22.32 and its $33.50 average price target is bullish, indicating room for 49% stock appreciation in the coming year. (See Thoughtworks stock forecast on TipRanks) 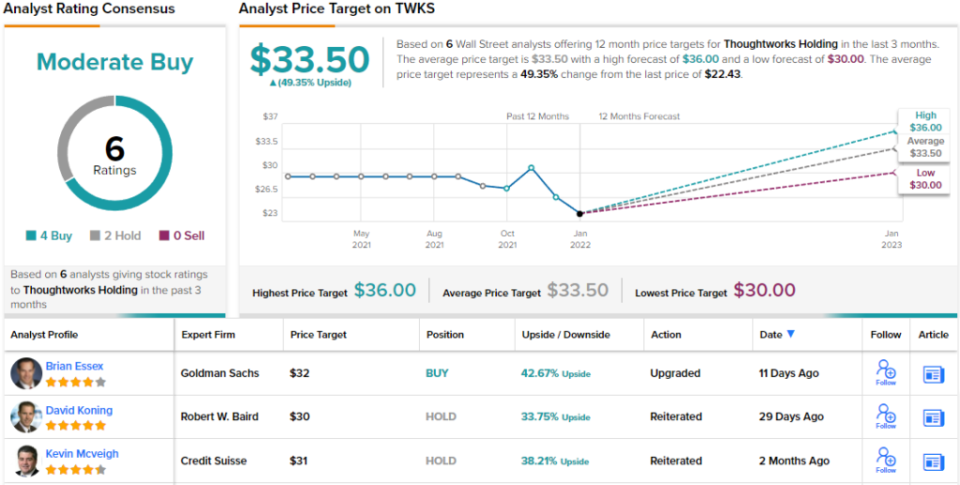 The next Goldman Sachs pick we're looking at is TaskUs, a digital outsource company that offers customers a streamlined process for the regular tasks of business housekeeping, back office work in customer service and care, online digital support, tech support, and billing support; content moderation and curation; data collection and automation; and ongoing consulting. In short, TaskUs will handle the scut work of business, so that enterprise clients can focus on their own core missions. TaskUs boasted over $470 million in revenue for 2020 – the last full year reported – showing the size of its target market.

While this digital outsourcer has been in business since 2008, it has only been publicly traded since last summer. In the June 2021 IPO, TASK shares jumped 26% from their initial price, and the company raised over $300 million in gross capital from the sale of 13.2 million shares. The stock has been volatile since then, more than doubling to its September peak and then falling 63% from that level.

The most recent quarterly report, however, shows solid gains year-over-year. Revenue was up 64% to $201 million, while EPS rose from 24 cents to 30 cents. Looking ahead, the company predicts between $747 and $751 million for full-year revenue in 2021; hitting that would make for 56% year-over-year revenue growth.

“TaskUs often pursues companies that are early in their maturity lifecycle in order to serve as an early outsourcing partner. This tends to result in greater customer loyalty and allows TaskUs to become more deeply integrated with customer operations. As clients gain scale, TaskUs adds capabilities that further accommodate outsourcing needs,” Essex noted.

"We view TaskUs as well-positioned to provide exposure to high growth technology end markets with a unique outsourcing platform. While we believe recent volatility has been associated with the company’s status as a new IPO, in addition to some PE overhang, we think the company is undervalued at current levels," the analyst added.

In line with his upbeat outlook for the company’s capabilities, Essex rates TASK shares a Buy, and his $77 price target indicates his confidence in a 153% upside for the next 12 months. (To watch Essex’s track record, click here) 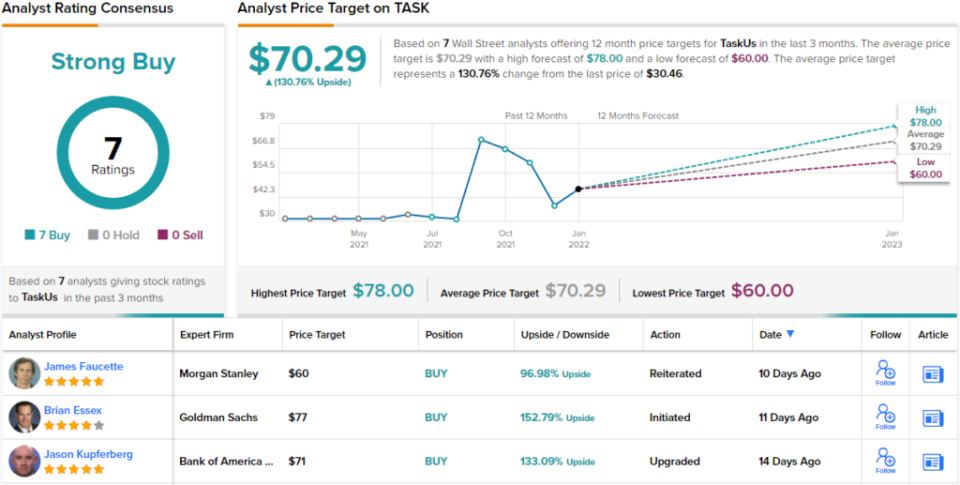 Last on our list of Goldman picks today is SolarEdge, a maker of microinverters essential in the solar power industry. SolarEdge doesn’t limit itself to microinverters; the company produces a wide range of products for the solar industry, from power optimizers to monitoring systems. With offices in the US, Germany, Italy, Japan, and Israel, SolarEdge has a truly global reach – and can always follow the sun. SolarEdge has shipped more than 27 gigawatts of DC optimized inverter systems for solar power installations in more than 130 countries.

SolarEdge has moved to differentiate itself from the competition in the global solar market by producing a mix of industrial and retail grade products. The company’s tech can be found in large solar power farms, but also in smaller home and commercial applications. In the final quarter of last year, SolarEdge put its Energy Bank battery and Energy Hub inverter systems on the North American market. Together, these systems offer promise of becoming industry leaders; the battery boasts a 94.5% round trip efficiency, while the Hub product can provide over 10kw of backup power for users.

While we won’t see numbers for that quarter until next month, we do have the numbers for the company’s 3Q21. Revenue, at $562.4 million, was a company record, and EPS was up 15% year-over-year to 96 cents. Wall Street had been expecting slightly better, however, and the stock slipped after the release. SEDG is currently down 33% from its November peak.

In coverage for Goldman Sachs, analyst Brian Lee explains why he sees this drop as an opportunity for investors.

"SEDG shares have re-rated significantly over the course of 2021, falling from a peak of 96X FY2 EPS to the mid 50’s more recently. This is despite consensus EPS estimates rising during the same period. In addition, our 2021-2023 EPS estimates are +2-12% above Factset consensus EPS, as the growing storage opportunity may be under-appreciated, in our view. Our estimates reflect our view that SEDG continues to weather current supply chain and logistics challenges well, while significant new growth drivers are being unlocked via the launch of its residential storage product and the entrance into the utility-scale inverter market," Lee opined.

"While still not as inexpensive as other solar companies within our coverage relative to historical averages, we believe [SEDG's] current valuations are significantly more attractive," the analyst summed up.

Given this view, Lee rates SEDG stock a Buy, with a $448 price target that suggests it has room to run 82% this year. (To watch Lee’s track record, click here)

Wall Street agrees. This solar company has attracted 20 reviews, with a breakdown of 15 Buys, 4 Holds, and 1 Sell giving a Moderate Buy consensus rating. Shares are priced at $245.35 and their average price target of $367.21 implies ~50% upside in 2022. (See SEDG stock forecast on TipRanks) 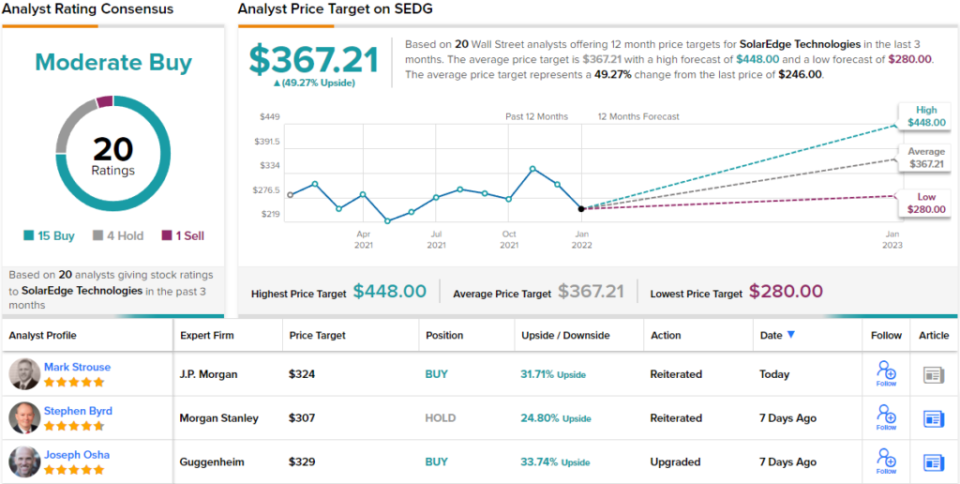 SolarEdge to Announce Financial Results for the Fourth Quarter and Year Ended December 31, 2022 on Monday, February 13, 2023