U.S. Olympic gold medalists Simone Biles and Katie Ledecky are the ship’s sponsors. Ledecky attended in person, while Biles participated via video, as the pair marked the important first milestone in construction of the aircraft carrier.

During the ceremony, Biles and Ledecky’s initials were welded onto a steel plate that will be permanently affixed to the ship, signifying the sponsors’ enduring relationship with the shipbuilders and crew.

In his remarks, Under Secretary of the Navy Erik Raven stressed the significance of aircraft carriers, calling upon shipbuilders to recognize the importance of what they build.

“Our aircraft carriers would not be possible without the designers and builders right here at Newport News Shipbuilding,” Raven said. “Every team member here at Newport News can be certain that each cut of steel, every wrench turned, and every challenge encountered to build her were steps toward strengthening our naval and national greatness — especially when this ship sails the open seas to protect our nation's interests.” 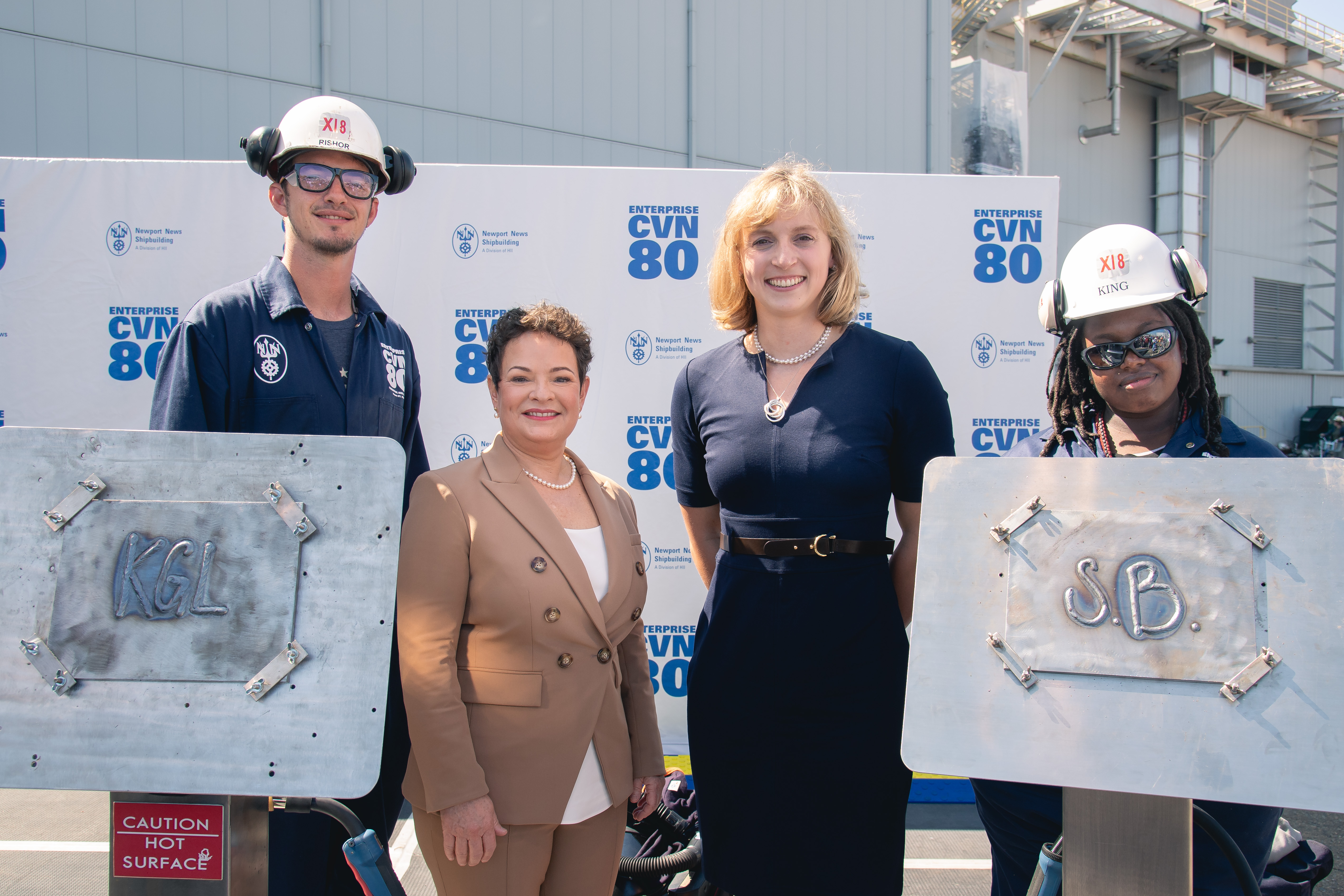 Photos accompanying this release are available at: https://hii.com/news/hii-keel-ceremony-aircraft-carrier-enterprise-cvn-80.

NNS President Jennifer Boykin spoke highly of the skilled shipbuilders constructing Enterprise, highlighting their commitment to the Navy and our nation as the only shipyard capable of building nuclear-powered aircraft carriers.

“These hardworking women and men take 100,000 tons of steel and technology and make it not only float, but serve as home, workplace, and shield for our Navy’s sailors,” Boykin told the crowd. “Shipbuilding takes discipline, precision, and an unrelenting drive for excellence, which we can never let falter because our sailors and their families depend on us.”Boykin also recognized all the veterans in attendance from previous U.S. Navy ships that have been named Enterprise, including CV 6 and CVN 65, both built at NNS. CVN 80 will be the ninth U.S. Navy vessel to carry on the name Enterprise. The most recent, CVN 65, was the first nuclear-powered aircraft carrier in history. Already, 20,000 pounds of steel from CVN 65 have been incorporated into modules for CVN 80. When fully constructed, more than 35,000 pounds of steel from CVN 65 will live on in CVN 80, ensuring the Enterprise legacy continues.

As America recognizes the 100-year legacy of aircraft carriers this year, all aircraft carriers operating in the U.S. Navy fleet today were built at NNS. Enterprise is the first aircraft carrier not only designed digitally, but also being built digitally using visual work instructions on laptops and tablets rather than paper drawings. Construction processes on Ford-class carriers, including Enterprise, are enabled by workforce learning that took place on USS Gerald R. Ford (CVN 78) and John F. Kennedy (CVN 79). Enterprise is the first of a two-carrier block buy for the Navy, with work also underway at NNS on the second, Doris Miller (CVN 81).

A video of the ceremony, along with additional information on Enterprise (CVN 80), can be found at http://HII.com/CVN80

HII is an all-domain defense and technologies partner, recognized worldwide as America’s largest shipbuilder. With a 135-year history of trusted partnerships in advancing U.S. national security, HII delivers critical capabilities ranging from the most powerful and survivable naval ships ever built, to unmanned systems, ISR and AI/ML analytics. HII leads the industry in mission-driven solutions that support and enable an all-domain force. Headquartered in Virginia, HII’s skilled workforce is 44,000 strong. For more information, visit:

A photo accompanying this announcement is available at https://www.globenewswire.com/NewsRoom/AttachmentNg/9d9955ab-ef1a-45eb-8137-4145c8b1373b

POSaBIT to Acquire MJ Platform, Leaf Data Systems and Ample Organics for US$4 Million Adding 350+ Merchants and More than US$2 Billion in GMV

Remark Holdings, Inc. partners with AAEON to simplify the delivery of AI-driven video analytics for a complex world