Jim Cramer Says Now Is the Time to Pull the Trigger on Stocks; Here Are 2 Names That Analysts Like 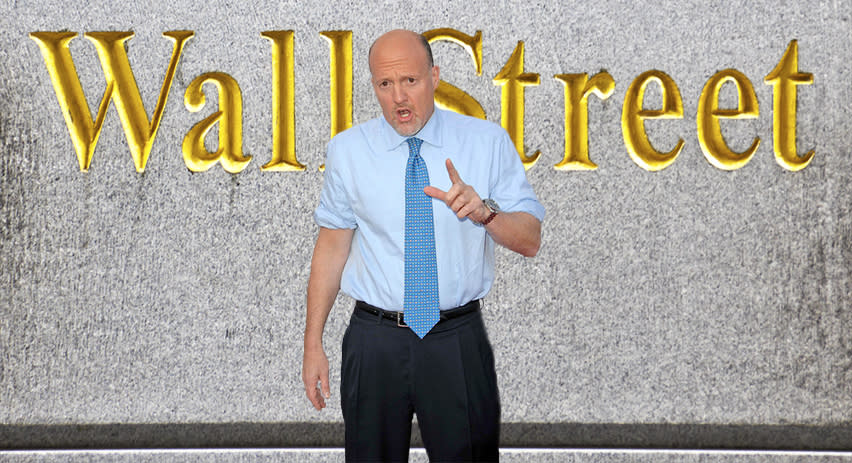 Investors are trying to make sense of the markets, in face of conflicting signals. Year-to-date, we’re facing deep losses – but more recently, a sharp rally despite this week’s confirmation that we’re in a recession. Government data released on Thursday showed a 0.9% GDP contraction in Q2, which came on the heels of a 1.6% contraction in Q1. That’s two quarters in a row, the definition of a recession.

Jim Cramer, the well-known host of CNBC’s ‘Mad Money’ program, reminds us the ‘conventional wisdom’ at a time like this is to dump stocks. But Cramer points out that Fed Chair Powell has indicated that the central bank will likely slow up its pace of interest rate hikes, and in Cramer’s words, “What Jay Powell said was extremely bullish.”

Explaining in better detail, Cramer says, “When the Fed gets out of the way, you have a real window and you’ve got to jump through it... When a recession comes, the Fed has the good sense to stop raising rates. And that pause means you’ve got to buy stocks... I think that window has finally arrived, and you don’t want to close it on yourself.”

Wall Street’s analysts are finding plenty to agree with in that assessment, and they’ve been picking out stocks that are poised to gain going forward from here. Using TipRanks' database, we pinpointed two stocks that are considered ‘Strong Buys.’ Not to mention considerable upside potential is on the table here.

The first stock we’ll look at, TuSimple, lives in the transportation industry. This company, founded in 2015, works with both autonomous AI and long haul freight carriage, in the development of autonomous trucking. The company’s goal is to use AI to solve issues of range, efficiency, and safety in the trucking industry.

TuSimple launched an autonomous freight network (AFN) in 2020, to start putting the company’s AI-powered navigation and LiDAR sensor systems into practical use. Currently, the company’s AFN operates in the Southwest US, with terminals and trucking lines in the sates of Texas, New Mexico, and Arizona. The company is continuing its Driver Out test operations, as a prelude to removing support vehicles from the network in favor of fully autonomous trucks.

The system has generated plenty of interest, and TuSimple has an agreement in place with Werner Enterprises, a leading North American logistics company, for roadside service and support. In addition, TuSimple increased its reservations by 500 in Q1 of this year, and now has a total of 7,475 reservations on its books.

The continued refining and expansion of the Driver Out technology and the autonomous freight network are the key points in analyst Ravi Shanker’s review of the stock for Morgan Stanley.

"This is not a winner-take-all market and multiple players will be successful here but for now, TSP is ahead of the pack in our view. In fact, given that TSP is the only company to have demonstrated Driver Out capability over multiple runs at highway speed on public highways (without teleops), we believe TSP may be the leader in autonomous driving, period, including many larger, older players in robotaxis,” the analyst added.

The Morgan Stanley view is not the only bullish take on TuSimple; this AI autonomous vehicle stock has 9 recent analyst reviews on record, with a breakdown of 8 to 1 in favor of Buys over Hold. The shares are trading at $10.08 and their $22.17 average price target implies a 120% upside potential for the coming year. (See TSP stock forecast on TipRanks) 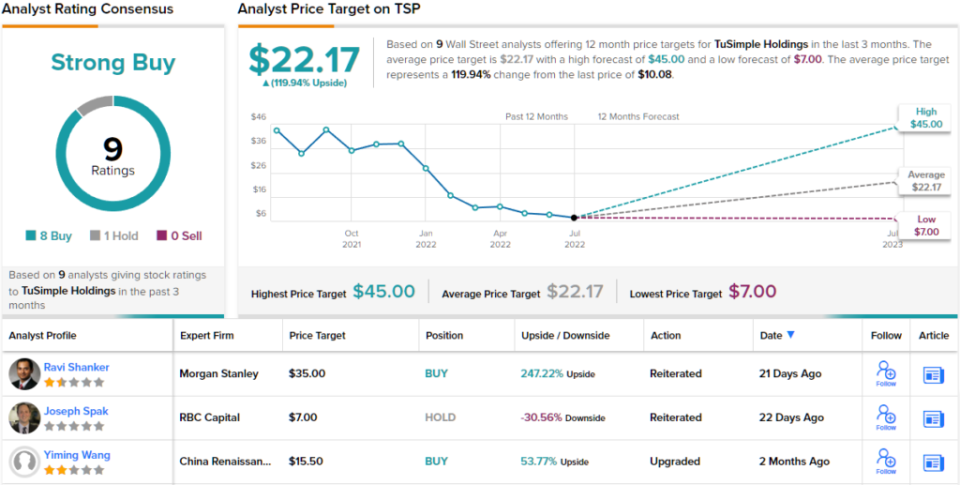 The next stock we’re looking at is an energy company, and independent oil and gas firm with operations in the Wattenberg Field of Colorado and the Delaware Basin in Texas. These players are important contributors to the US oil and gas sector and PDC produced an average last year of 195,000 barrels of oil equivalent per day. The company production is focuses on liquids – crude oil and natural gas liquids. The bulk of that production, some 85%, came from the Wattenberg Field.

Strong production continued as 2022 got started. PDC reported 199,000 barrels of oil equivalent (boe) per day in the first quarter, for total production of 17.9 million boe. Of that, 5.9 million barrels was crude oil, the balance, some two-third of production, was in natural gas liquids. The company reported a total of $882.4 million in hydrocarbon revenues for 1Q22, nearly double the year-ago quarter’s result. The revenue total supported a diluted EPS of $3.66, an increase of 27% from 1Q21. PDC will report 2Q22 numbers in early August.

As important as the current numbers are, the trend lines for PDC also deserve a look. Since the second quarter of 2020, the company has posted seven quarters in a row of both sequential revenue gains and EPS increases. Along with these solid results, PDCE shares have outperformed in 2022; where the broader markets are down, PDCE has gained 30% year-to-date.

Turning now to Wall Street, PDC has attracted the attention of Wells Fargo's Nitin Kumar. The 5-star analyst writes: “PDC Energy is one of the few SMID cap companies in the E&P space that we estimate showcases the capital efficiency needed to grow production while spending below cash flows assuming conservative oil prices... We believe the stock offers a distinctive mix of low leverage (-0.3x/-0.7x by 2022e/2023e), notable discount vs. peers currently and strong asset quality.”

Kumar sets an Overweight (i.e. Buy) rating here, seeing plenty of potential for PDC to continue its strong performance. His price target, of $105, suggests the stock has a one-year upside of 66% ahead of it. (To watch Kumar’s track record, click here)

Some companies just draw in the bulls and at a time of economic uncertainty, a consistently high-performing energy company is sure to be one of them. PDC Energy has picked up 9 analyst reviews recently, and they are all positive, for a unanimous Strong Buy consensus rating. The average price target of $103.89 implies ~63% upside over the coming year. (See PDCE stock forecast on TipRanks) 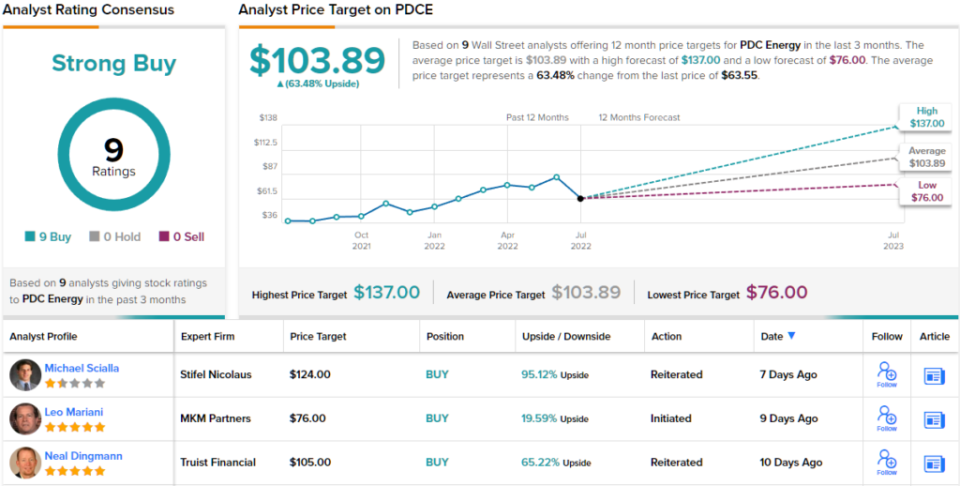