Jobs in focus after hawkish Powell speech: What to know this week

The latest monthly jobs report is this week’s main attraction as investors barrel into September.

August employment data from the Labor Department is set for release at 8:30 a.m. ET Friday morning, and is expected to show another strong month for the U.S. labor market. Economists expect nonfarm payrolls rose by 300,000 in August, according to data from Bloomberg.

The figure is likely to serve a key role in dictating the Federal Reserve’s next rate decision at its policy-setting meeting later this month. Investors will keep a close eye on jobs data after Fed Chair Jerome Powell asserted in a hawkish speech at the Jackson Hole symposium Friday he is willing to accept a softening labor market in exchange for mitigating inflation. 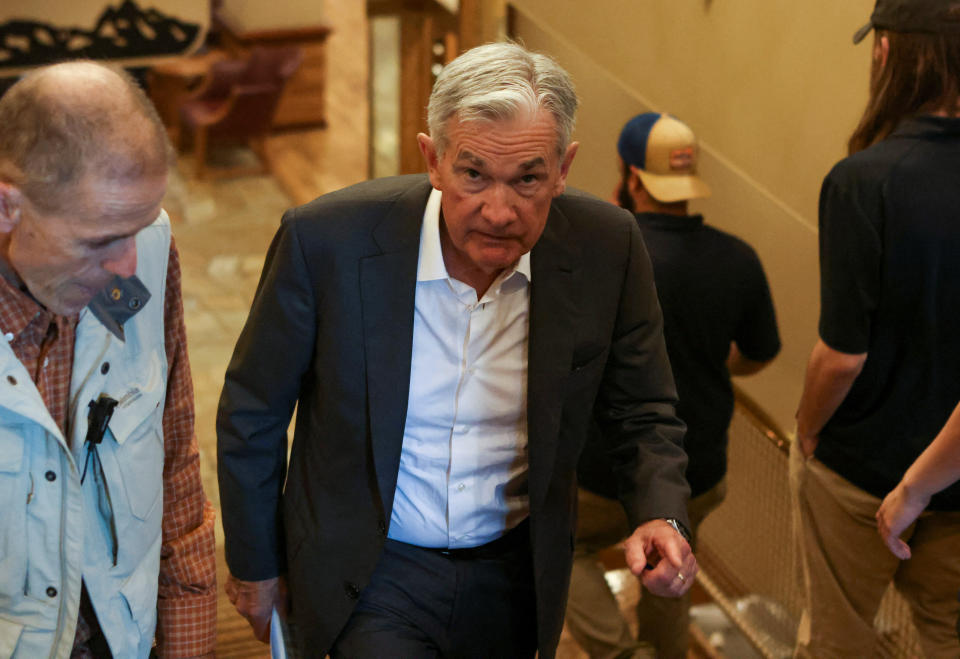 Jerome Powell, chair of the Federal Reserve walks in Teton National Park where financial leaders from around the world gathered for the Jackson Hole Economic Symposium outside Jackson, Wyoming, U.S., August 26, 2022. REUTERS/Jim Urquhart

“If there is a conflict in the Fed’s two mandates as they work to slow inflation, Chair Powell ranks price stability head and shoulders above maximum employment,” Jeff Klingelhofer, co-head of investments at Thornburg Investment Management said in a note on Friday.

“There will very likely be some softening of labor market conditions,” Powell said in his speech.

“While higher interest rates, slower growth and softer labor market conditions will bring down inflation, they will also bring some pain to households and businesses,” Powell added. “These are the unfortunate costs of reducing inflation. But a failure to restore price stability would mean far greater pain.”

Up until Friday, some market participants had expected the U.S. central bank may pivot in its monetary tightening plans, but Powell and other officials have pushed back on the possibility of notching down rate hikes this year.

Inflation has shown signs of moderating, but continues to run sharply higher than the Federal Reserve’s target of 2%. Data from the Bureau of Economic Analysis on Friday showed consumer prices fell slightly last month, with headline PCE falling 0.1% between June and July, driven primarily by a 4.8% decline in energy prices. On a year-over-year basis, headline PCE rose 6.3% in July.

David Malpass, president of the World Bank Group, looks on next to a stuffed grizzly bear at Teton National Park, where financial leaders from around the world gathered for the Jackson Hole Economic Symposium, outside Jackson, Wyoming, U.S., August 26, 2022. REUTERS/Jim Urquhart

And core PCE, the Fed's preferred measure of inflation, rose 0.1% month-on-month in July and 4.6% from the prior year, marking the lowest annual increase since October 2021.

Still, Powell indicated another “unusually large” rate hike was possible in September after the central bank raised rates by 75 basis points in June and July.

Elsewhere in labor market data, ADP will resume its private payrolls report with new a methodology on Wednesday after a temporary pause in June and July. Economists surveyed by Bloomberg expect the release to show 300,000 private payrolls were added in August.

ADP's monthly private jobs report comes two days before the Labor Department releases its official jobs report. While the company’s print is an imperfect precursor to the government’s release, it offers a snapshot of job growth during the period.

The Job Openings and Labor Turnover Survey (JOLTS), Challenger Job Cuts, and initial weekly jobless claims are also on the docket of employment data set for release this week.

On the earnings front, the reporting season has largely wound down, but a few potentially market-moving results are still on tap. Traders will get figures from headliners including Best Buy (BBY), HP (HPQ), Big Lots (BIG), Chewy (CHWY), Lululemon Athletica (LULU), and Broadcom (AVGO).

10 High-Dividend Stocks to Consider, From Target (TGT) to McDonalds (MCD)

Analyst: Sell Best Buy stock as sales remain 'some of the worst in retail'

#Collaboration
#Featured
#Letter to Board of Directors
#Trending News