2.5 Million LiveOne Members and Fans Can Text 'MusicGives' to 44321 to Donate to Support Women's Rights and Roe v Wade via WRRAP;CEO to Match Fan Donations 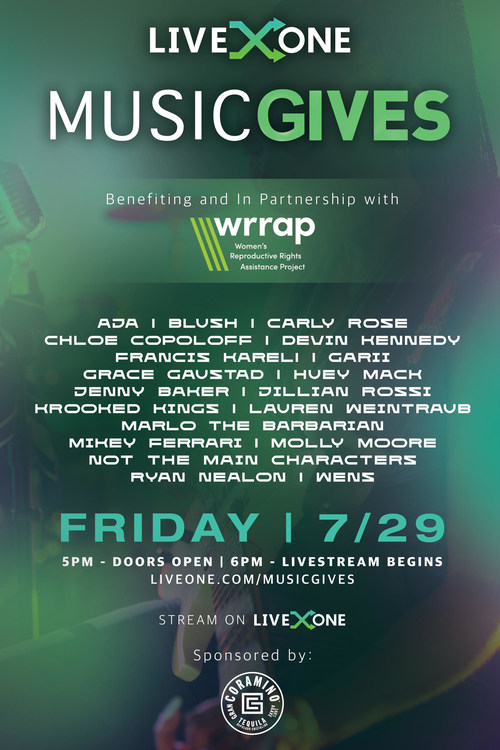 The live event will feature performances from 20 emerging and established artists held in Beverly Hills on Friday, July 29th at 9 PM ET/ 6 PM PT. This live festival will be exclusively livestreamed on the LiveOne platform to over 220 countries, and fans can text 'MusicGives' to 44321 to donate to WRRAP. "Music Gives" is a brand-new franchise expanding from LiveOne's original franchise "Music Lives" and its philanthropic efforts. Music Lives achieved over 5 billion engagements with over 350 artists worldwide.

"We are proud to support women's rights and raise awareness and funding for women's liberties," said Robert Ellin, CEO and Chairman of LiveOne. "I am personally going to match all donations up to $100,000 in my shares of LiveOne's stock. Beginning with WRRAP, "Music Gives" will be a franchise that uses music as a catalyst for change and to benefit numerous charity organizations. LiveOne aims to unify the world around live music while supporting causes that it passionately stands behind."

"LiveOne's "Music Gives" recognizes the important role artists play in building awareness and raising urgently needed funding for WRRAP," said Sylvia Ghazarian, Executive Director of WRRAP. "We commend LiveOne's "Music Gives" festival for standing with us with their support of reproductive justice as we continue to fight for our fundamental human rights. The money raised by LiveOne and these artists will impact the lives of so many in our communities across the country."

Music Lives has been committed to philanthropic initiatives, using music as the catalyst for change. LiveOne has partnered with numerous organizations to support many causes, including Shaq's Fun House vs. Gronk Beach benefitting social justice, Camp Southern Ground with The Zac Brown Band and Robin Hood, and iHeartMedia to support New Yorkers impacted by COVID-19 with "Rise Up New York!". LiveOne has also launched its own benefit festival franchise Music Lives benefiting NIVA's #SaveOurStages, which has garnered over 5 billion impressions and promoted nearly 400 musical artists to support the entertainment industry in the wake of the COVID-19 pandemic.

Headquartered in Los Angeles, California, LiveOne, Inc. (NASDAQ: LVO) (the "Company") is an award-winning, creator-first, music, entertainment and technology platform focused on delivering premium experiences and content worldwide through memberships and live and virtual events. The Company was awarded Best Live Moment by Digiday for its "Social Gloves" PPV Event, and has been a finalist for 8 more awards, including Best Live Event, Best Virtual Event, Best Overall Social Media Excellence, and Best Original Programming from Cynopsis and Digiday. As of June 26, 2022, the Company has accrued a paid and free membership base of over 2.35 million**, streamed over 2,900 artists, has a library of 30 million songs, 600 curated radio stations, over 300 podcasts/vodcasts, hundreds of pay-per-views, personalized merchandise, released music-related NFTs, and created a valuable connection between fans, brands, and bands. The Company's wholly-owned subsidiaries include Slacker Radio, React Presents, Gramophone Media, Palm Beach Records, Custom Personalization Solutions, LiveXLive, PPVOne and PodcastOne, which generates more than 2.48 billion downloads per year and 300+ episodes distributed per week across its stable of top-rated podcasts. LiveOne is available on iOS, Android, Roku, Apple TV, Amazon Fire, and through OTT, STIRR, and XUMO. For more information, visit www.liveone.com and follow us on Facebook, Instagram, TikTok, and Twitter at @liveone.

All statements other than statements of historical facts contained in this press release are "forward-looking statements," which may often, but not always, be identified by the use of such words as "may," "might," "will," "will likely result," "would," "should," "estimate," "plan," "project," "forecast," "intend," "expect," "anticipate," "believe," "seek," "continue," "target" or the negative of such terms or other similar expressions. These statements involve known and unknown risks, uncertainties and other factors, which may cause actual results, performance or achievements to differ materially from those expressed or implied by such statements, including: the Company's reliance on one key customer for a substantial percentage of its revenue; the Company's ability to consummate any proposed financing, acquisition, spin-out, distribution or transaction, including the proposed spin-out of PodcastOne or its pay-per-view business, the timing of the closing of such proposed event, including the risks that a condition to closing would not be satisfied within the expected timeframe or at all, or that the closing of any proposed financing, acquisition, spin-out, distribution or transaction will not occur or whether any such event will enhance shareholder value; PodcastOne's ability to list on a national exchange; the Company's ability to continue as a going concern; the Company's ability to attract, maintain and increase the number of its users and paid members; the Company identifying, acquiring, securing and developing content; the Company's intent to repurchase shares of its common stock from time to time under its announced stock repurchase program and the timing, price, and quantity of repurchases, if any, under the program; the Company's ability to maintain compliance with certain financial and other covenants; the Company successfully implementing its growth strategy, including relating to its technology platforms and applications; management's relationships with industry stakeholders; the effects of the global Covid-19 pandemic; uncertain and unfavorable outcomes in legal proceedings; changes in economic conditions; competition; risks and uncertainties applicable to the businesses of the Company's subsidiaries; and other risks, uncertainties and factors including, but not limited to, those described in the Company's Annual Report on Form 10-K for the fiscal year ended March 31, 2022, filed with the U.S. Securities and Exchange Commission (the "SEC") on June 29, 2022, and in the Company's other filings and submissions with the SEC. These forward-looking statements speak only as of the date hereof, and the Company disclaims any obligations to update these statements, except as may be required by law. The Company intends that all forward-looking statements be subject to the safe-harbor provisions of the Private Securities Litigation Reform Act of 1995.

** Included in the total number of paid members for the reported periods are certain members which are the subject of a contractual dispute. LiveOne is currently not recognizing revenue related to these members.

LiveOne's Wholly Owned Subsidiary PodcastOne Closes $8.1 Million Financing at a Pre-Money Valuation of $60 Million as Part of Its Intention to Spin-Out PodcastOne as a Separate Public Company Before Year End