BURLINGTON, ON / ACCESSWIRE / April 4, 2022 / Murchison Minerals Ltd. (“Murchison” or the “Company”) (TSXV:MUR)(OTCQB:MURMF) is pleased to announce the results from the recently completed recompilation and modelling of holes drilled at the Barre de Fer (BDF) Zone on the 100% – owned HPM (Haut-Plateau de la Manicouagan) Project, located in Quebec. Based on these results the Company is advancing a strategy to expand and delineate the BDF Zone and surrounding prospective areas during this summer’s planned drill program. In support of these plans, the Company is also pleased to announce that it has awarded the summer drilling contract, on the HPM property, to Logan Drilling.

The Company also wishes to invite interested parties to an Investor Webinar being hosted by CHF Capital Markets on April 12th at 2:00 EST where Troy Boisjoli – President and CEO of Murchison Minerals Ltd. – will be answering your questions on the HPM project. Questions can be submitted a head of time to: [email protected] To register copy and paste the link below in a supported browser: 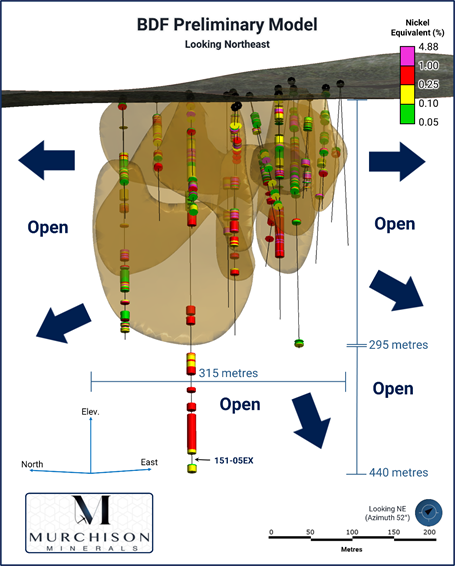 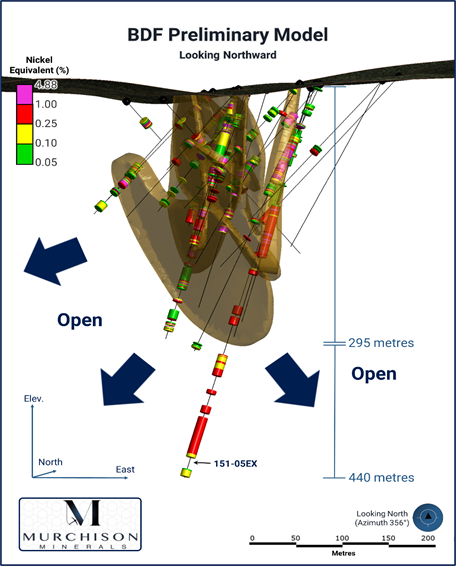 *Assays predate Murchison Minerals Ltd.; and were not subject to Murchison’s QA/QC Procedures. Assays are as reported by Falconbridge, Rockwell Ventures Inc, and Manicouagan Minerals.

“The compilation and modelling by Murchison’s technical team of previous exploration completed at the HPM project further demonstrates the mining-camp scale potential of the HPM project. The potential at Barre de Fer to grow a significant high-grade near-surface mineral resource, likely amenable to open-pit mining, is exceptional. The planned 2022 exploration program, based on the work of the technical team, will leverage previous exploration at BDF with the objective to materially advance the project.”

“The style of mineralization at Barre de Fer comprises both disseminated interstitial and net-texture sulfide as well as massive sulfide stringers and breccia sulfides. The consistent concentrations of Ni recalculated into 100% sulfide (~3%Ni in 100% sulfide) together with the complex textural relationships between the sulfides and the country rocks are all very encouraging features found in other magmatic sulfide mineral systems that are currently in production. These relationships together with the conductive signal of the higher grade mineralization provides a robust foundation on which exploration strategies can be based.”

The Company recently completed a comprehensive data compilation, verification and modelling program, comprising all drill hole data from the Barre de Fer Zone. The modelling program consisted of developing a preliminary 3D interpretation of nickel mineralization at BDF (Figure 1 and 2). Based on the modelling, the Zone outcrops on surface, extends to a vertical depth of 295 m, has a strike length of 315 m, and is composed of multiple stacked lenses over a maximum Zone footprint width of 150 m. Individual lenses have a maximum thickness of 28 m. However, extensive mineralization has been intersected to a vertical depth of 440 m, and the Zone remains undrilled and unconstrained along strike and at depth. No resource estimates have been completed on the Zone to date.

Hole 151-05 is the deepest hole in the Zone, originally drilled to a depth of 180 m, then extended to 473 m in 2002 (151-05EX). The final 293 meters of the hole intersected 93.45 m of nickel mineralization; there are currently no adjacent holes to this zone of mineralization, indicating significant potential within the Zone below 295 m (Figure 1 and 2). 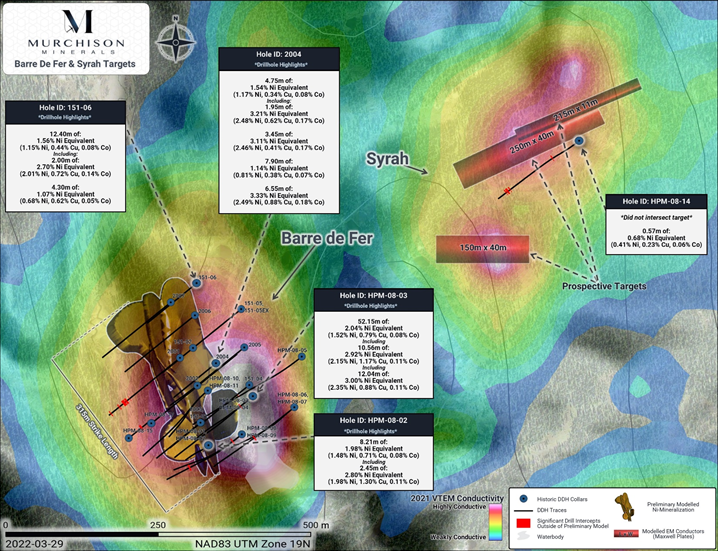 The nickel-copper-cobalt mineralization at the BDF Zone consists of steeply dipping disseminations, stringers, net textured breccias and massive intervals of sulphide (pyrrhotite, chalcopyrite and pentlandite) hosted within a complex assemblage of norite, gabbronorite and peridotite. The Zone has been highly metamorphosed, and the sulphide mineralization is inferred to have been remobilized, indicating significant bodies of mineralization may yet be discovered.

The BDF Zone was first discovered in 1999 by Falconbridge through reconnaissance prospecting. It was first drill tested in 2001 with five diamond drill holes totalling 1,132 metres, intersecting significant high-grade Ni-Cu-Co bearing sulphide mineralization in four of the five holes. In 2002, the property was optioned to Rockwell Ventures Inc. who then completed seven holes, plus the extension of drill hole 151-05 (151-05EX) totalling 1,771 m of drilling. All seven holes, plus the extension hole 151-05EX intersected Ni-Cu-Co bearing sulphide mineralization.

In 2006, Pure Nickel Inc. purchased 100% of the property from Xstrata Nickel (formerly Falconbridge). In 2007 Manicouagan Minerals Inc. (Murchison Minerals Ltd.’s predecessor company) entered into an option agreement to earn up to 50% of the property from Pure Nickel Inc. In 2008, Manicouagan Minerals Inc. completed 13 holes totalling 2,661 metres of drilling at BDF, of which 11 holes intersected significant zones of Ni-Cu-Co bearing sulphide mineralization. Since the completion of the 2008 diamond drill program at the Barre de Fer Zone – which coincided with the beginning of a global recession – no further drilling has been completed. In 2019, Murchison Minerals Ltd. acquired 100% of the HPM project by purchasing the remaining 50% from Pure Nickel Inc.

Subject to the purchase agreement between Pure Nickel Inc. and Xstrata Nickel, Glencore retains certain rights with respect to the original mining claims area (Figure 4) including (i) a 2% NSR on each property (the Company has the right to re-acquire 1% thereof for CAD$1,000,000); (ii) off-take and marketing rights for all concentrate or product produced from the properties; and (iii) a one-time back-in right to 50% for any mining project with an economic threshold of 15,000,000 tonnes of resources by a) funding a feasibility study up to C$20,000,000, and b) making payment equal to two times the aggregate exploration expenditures to date. 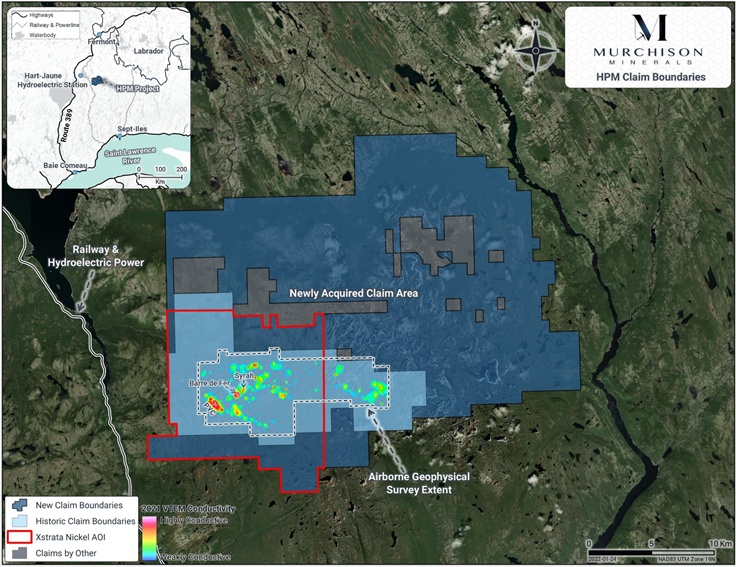 The Company is advancing a strategy to expand and delineate the Zone and surrounding prospective areas during this summer’s planned drill program:

*Assays predate Murchison Minerals Ltd.; and were not subject to Murchison’s QA/QC Procedures. Assays are as reported by Falconbridge, Rockwell Ventures Inc, and Manicouagan Minerals.

About the HPM Project 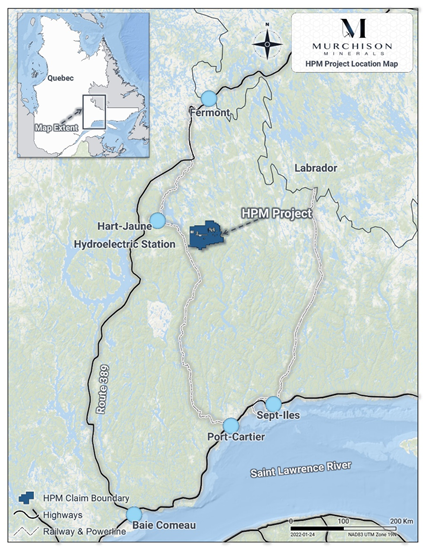 The Project is located within the Haut-Plateau de la Manicouagan area. The claims host prospective gabbroic, ultramafic and anorthositic rock bodies within the Manicouagan metamorphic complex and are associated with significant nickel-copper-cobalt sulphide mineralization first identified by Falconbridge in 1999 and discovered extensive nickel-bearing sulphide mineralization at Barre de Fer during drilling in 2001 – 2002. Pure Nickel and Murchison Minerals Ltd.’s predecessor – Manicouagan Minerals – continued drilling in the area until 2008. The majority of the past drilling at the HPM Project targeted the Barre de Fer geophysical conductor and confirmed the presence of nickel-copper-cobalt sulphide mineralization over approximately 315 metres strike length to a depth of 295 metres. The mineralization remains open at depth and along strike.

After Murchison Minerals Ltd. acquired 100% ownership of the property in 2019, the Company has focused exploration work on the camp-scale potential of the region. Aerial EM surveys completed in the spring of 2021 identified more than 50 anomalous conductors. Prospecting crews were able to traverse five of the more than 50 anomalies and discovered new outcrops of nickel-bearing sulphide mineralization in the process. The prospecting program was followed by an inaugural drill program at the PYC target area – an EM anomaly with a 1.95 km strike length. Subsequent to the completion of the drill program at PYC, the Company increased its dominant land position in the Haut-Plateau region from 139 km2 to 576 km2.

The foregoing scientific and technical disclosures on the HPM Project have been reviewed by John Shmyr, P.Geo., VP Exploration, a registered member of the Professional Engineers and Geoscientists of Saskatchewan and current holder of a special authorization with the Ordre des Géologues du Québec. Mr. Shmyr is a Qualified Person as defined by National Instrument 43-101.

Murchison is a Canadian‐based exploration company focused on nickel-copper-cobalt exploration at the 100% – owned HPM Project in Quebec and the exploration and development of the 100% – owned Brabant Lake zinc‐copper‐silver project in north‐central Saskatchewan. The Company also holds an option to earn 100% interest in the Barraute VMS exploration project also located in Quebec, north of Val d’Or. Murchison currently has 160.6 million shares issued and outstanding.

Additional information about Murchison and its exploration projects can be found on the Company’s website at www.murchisonminerals.ca . For further information, please contact:

Certain information set forth in this news release may contain forward‐looking information that involves substantial known and unknown risks and uncertainties. This forward‐looking information is subject to numerous risks and uncertainties, certain of which are beyond the control of the Company, including, but not limited to, the impact of general economic conditions, industry conditions, and dependence upon regulatory approvals.

FLI herein includes, but is not limited to: future drill results; stakeholder engagement and relationships; parameters and methods used with respect to the assay results; the prospects, if any, of the deposits; future prospects at the deposits; and the significance of exploration activities and results. FLI is designed to help you understand management’s current views of its near- and longer-term prospects, and it may not be appropriate for other purposes. FLI by their nature are based on assumptions and involve known and unknown risks, uncertainties and other factors which may cause the actual results, performance or achievements of the Company to be materially different from any future results, performance or achievements expressed or implied by such FLI. Although the FLI contained in this press release is based upon what management believes, or believed at the time, to be reasonable assumptions, the Company cannot assure shareholders and prospective purchasers of securities of the Company that actual results will be consistent with such FLI, as there may be other factors that cause results not to be as anticipated, estimated or intended, and neither the Company nor any other person assumes responsibility for the accuracy and completeness of any such FLI. Except as required by law, the Company does not undertake, and assumes no obligation, to update or revise any such FLI contained herein to reflect new events or circumstances, except as may be required by law. Unless otherwise noted, this press release has been prepared based on information available as of the date of this press release. Accordingly, you should not place undue reliance on the FLI or information contained herein. Furthermore, should one or more of the risks, uncertainties or other factors materialize, or should underlying assumptions prove incorrect, actual results may vary materially from those described in FLI. Assumptions upon which FLI is based, without limitation, include: the ability of exploration activities to accurately predict mineralization; the accuracy of geological modelling; the ability of the Company to complete further exploration activities; the legitimacy of title and property interests in the deposits; the accuracy of key assumptions, parameters or methods used to obtain the assay results; the ability of the Company to obtain required approvals; the results of exploration activities; the evolution of the global economic climate; metal prices; environmental expectations; community and nongovernmental actions; and any impacts of COVID-19 on the deposits, the Company’s financial position, the Company’s ability to secure required funding, or operations. Risks and uncertainties about the Company’s business are more fully discussed in the disclosure materials filed with the securities regulatory authorities in Canada, which are available at www.sedar.com.

05/12/2022 11:14 Murchison Minerals Invites You to Join Us at The Vancouver Resource Investment Conference

05/03/2022 14:56 Couloir Capital Ltd. is Pleased to Announce the Initiation of Research Coverage on Murchison Minerals Ltd.

03/23/2022 08:30 Murchison Minerals is Granted Conditional Approval by the TSXV for the Early Warrant Incentive Program and Confirms Insiders Participation