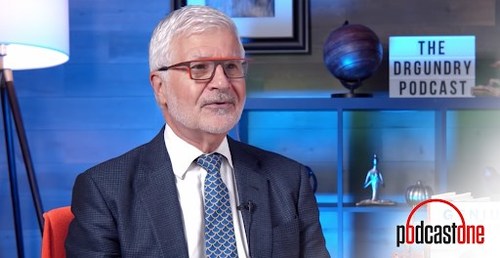 Having doubled in audience size since joining PodcastOne in 2020, the mission of The Dr. Gundry Podcast is to help you live your best life — mind, body and soul — by empowering you with the tools and knowledge you need. Dr. Gundry interviews some of the world’s leading experts, like Arianna Huffington, Dr. Mark Hyman, Dave Asprey and more, and offers cutting-edge wellness expertise during his topical lectures.

“We’re proud to be the network that brings The Dr. Gundry Podcast to audiences each week. His episodes are informational, enlightening and quite literally life changing. Cheers to 200 wonderful episodes and we’re looking forward to the next 200,” said Kit Gray, President of PodcastOne.

Steven Gundry MD is a former cardiothoracic surgeon, medical researcher, restorative medicine practitioner and bestselling author. During his 40-year career, Dr. Gundry has performed over 10,000 surgeries and developed patented, life-saving medical technology.  After discovering how nutrition could help his patients avoid surgery, he wrote the book, “Dr. Gundry’s Diet Evolution” in 2008 which outlines his unique nutrition plan for wellness. In 2017, he released his second book, New York Times bestseller, “The Plant Paradox”, that outlines his revolutionary lectin-free diet which has helped tens of thousands lose weight and achieve better health. Ever the constant researcher in pursuit of science-backed solutions for whole body wellness, Dr. Gundry has authored six sequel health books, including his latest, “Unlocking the Keto Code” which focuses on optimizing mitochondrial uncoupling as an essential component of longevity.  Produced by Lanee Neil, The Dr Gundry Podcast is an integral part of the 71-year-old doctor’s mission to empower as many people as possible with the tools to reclaim health and live well until a ripe old age.

Recently named #8 on the list of top podcast publishers in the United States by Podtrac, the industry-leading podcast metric company, PodcastOne’s full roster of programming is available on PodcastOne, Apple Podcasts, Spotify, Amazon Music and wherever podcasts are heard.

About LiveOne, Inc.Headquartered in Los Angeles, California, LiveOne, Inc. (NASDAQ: LVO) (the “Company”) is an award-winning, creator-first, music, entertainment and technology platform focused on delivering premium experiences and content worldwide through memberships and live and virtual events. As of April 1, 2022, the Company has accrued a paid and free membership base of over 2.23 million**, streamed over 2,900 artists, has a library of 30 million songs, 600 curated radio stations, nearly 270 podcasts/vodcasts, hundreds of pay-per-views, personalized merchandise, released music-related NFTs, and created a valuable connection between fans, brands, and bands. The Company’s wholly-owned subsidiaries include Slacker Radio, React Presents, Gramophone Media, Palm Beach Records, Custom Personalization Solutions, LiveXLive, PPVOne and PodcastOne, which generates more than 2.48 billion downloads per year and 300+ episodes distributed per week across its stable of top-rated podcasts. LiveOne is available on iOS, Android, Roku, Apple TV, Amazon Fire, and through OTT, STIRR, and XUMO. For more information, visit www.liveone.com and follow us on Facebook, Instagram, TikTok, and Twitter at @liveone.

Forward-Looking StatementsAll statements other than statements of historical facts contained in this press release are “forward-looking statements,” which may often, but not always, be identified by the use of such words as “may,” “might,” “will,” “will likely result,” “would,” “should,” “estimate,” “plan,” “project,” “forecast,” “intend,” “expect,” “anticipate,” “believe,” “seek,” “continue,” “target” or the negative of such terms or other similar expressions. These statements involve known and unknown risks, uncertainties and other factors, which may cause actual results, performance or achievements to differ materially from those expressed or implied by such statements, including: the Company’s reliance on one key customer for a substantial percentage of its revenue; the Company’s ability to consummate any proposed financing, acquisition, spin-out, distribution or transaction, the timing of the closing of such proposed event, including the risks that a condition to closing would not be satisfied within the expected timeframe or at all, or that the closing of any proposed financing, acquisition, spin-out, distribution or transaction will not occur or whether any such event will enhance shareholder value; the Company’s ability to continue as a going concern; the Company’s ability to attract, maintain and increase the number of its users and paid subscribers; the Company identifying, acquiring, securing and developing content; the Company’s intent to repurchase shares of its common stock from time to time under its announced stock repurchase program and the timing, price, and quantity of repurchases, if any, under the program; the Company’s ability to maintain compliance with certain financial and other covenants; the Company successfully implementing its growth strategy, including relating to its technology platforms and applications; management’s relationships with industry stakeholders; the effects of the global Covid-19 pandemic; changes in economic conditions; competition; risks and uncertainties applicable to the businesses of the Company’s subsidiaries; and other risks, uncertainties and factors including, but not limited to, those described in the Company’s Annual Report on Form 10-K for the fiscal year ended March 31, 2021, filed with the U.S. Securities and Exchange Commission (the “SEC”) on July 14, 2021, Quarterly Report on Form 10-Q for the quarter ended June 30, 2021, filed with the SEC on August 16, 2021, Quarterly Report on Form 10-Q for the fiscal quarter ended September 30, 2021, filed with the SEC on October 29, 2021, Quarterly Report on Form 10-Q for the fiscal quarter ended December 31, 2021, filed with the SEC on February 14, 2022, and in the Company’s other filings and submissions with the SEC. These forward-looking statements speak only as of the date hereof, and the Company disclaims any obligations to update these statements, except as may be required by law. The Company intends that all forward-looking statements be subject to the safe-harbor provisions of the Private Securities Litigation Reform Act of 1995.

** Included in the total number of paid members for the reported periods are certain members which are the subject of a contractual dispute. LiveOne is currently not recognizing revenue related to these members.

06/06/2022 07:00 LIVEONE, PODCASTONE AND HYUNDAI TEAM UP FOR LIVE EVENTS WITH JORDAN HARBINGER AND LADYGANG

05/25/2022 07:00 LIVEONE INCREASES CURRENT PORTION OF ITS STOCK REPURCHASE PROGRAM TO UP TO $1 MILLION WORTH OF SHARES