VANCOUVER, BC / ACCESSWIRE / April 7, 2022 / SNOWLINE GOLD CORP. (CSE:SGD)(OTCQB:SNWGF) (the “Company” or “Snowline“) is pleased to provide an update on generative exploration results from its Rogue project in the Yukon Territory, Canada. Geochemical assay results received from late season 2021 contour soil and talus fine sampling reveal a large zone of anomalous gold values to 1.71 g/t Au on top of and around a probable, near-surface, gold-bearing intrusion at the Company’s Gracie target. 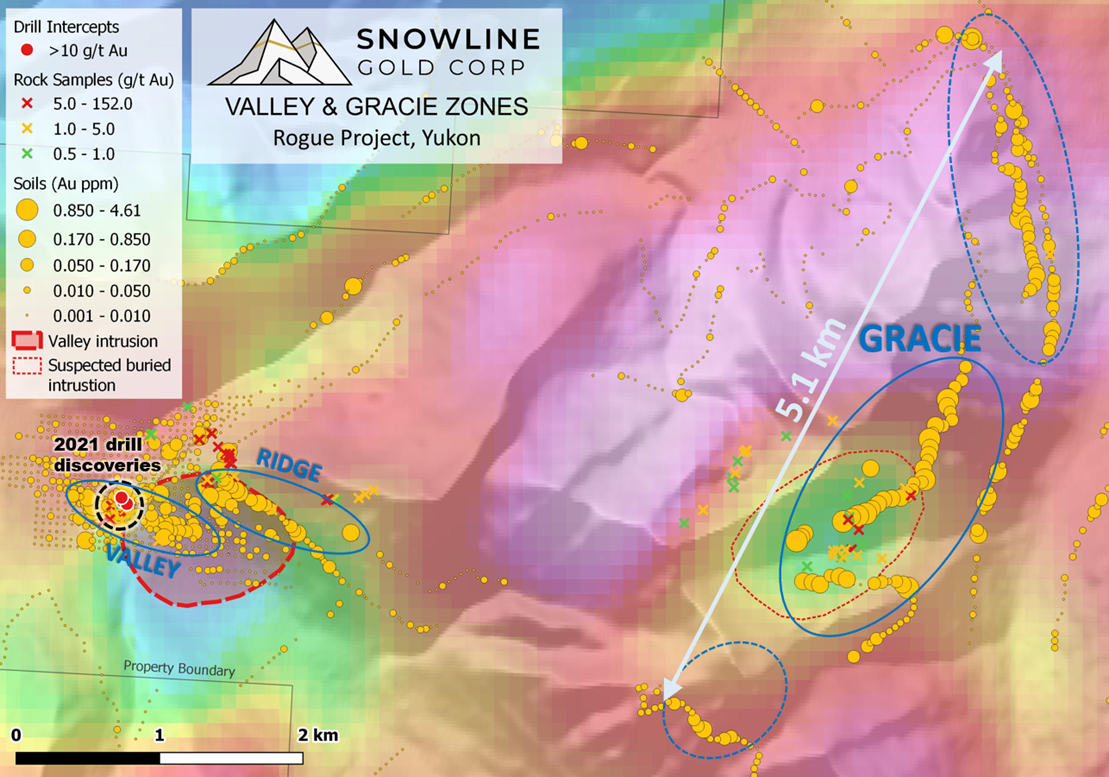 Figure 1 – Soil, talus fine and rock geochemical results from Snowline’s Rogue project on top of ZTEM electromagnetic survey results. Surface sampling performed late in the 2021 field season demonstrates the scale of gold anomalism associated with a probable buried intrusion, with values of up to 1.71 g/t Au from talus fines at Gracie. Dashed blue ovals indicate zones of anomalous results. Samples from the central zone have an average of 0.49 g/t. North and south zones of anomalous gold values are along stratigraphic and structural trend with the unexposed intrusion. The Valley intrusion and suspected Gracie intrusion are expressed in in the ZTEM image as cooler colours representing relative electrical resistors, consistent with other known intrusions in the survey area.

“These results add to strong evidence that Gracie could host a large and fertile reduced-intrusion related gold system,” said Scott Berdahl, CEO and director of Snowline. “What excites us about this-beyond the potential to duplicate our Valley discovery-is that the intrusion at Gracie hasn’t been exposed by erosion. These gold systems can be most prospective at the very top of an intrusion, where initial cooling of the edges creates a brittle carapace that fractures to accommodate later gold bearing fluids. An intact carapace at Gracie thus makes for a compelling exploration target adjacent and complementary to the Company’s 2021 Valley and Ridge discoveries.” 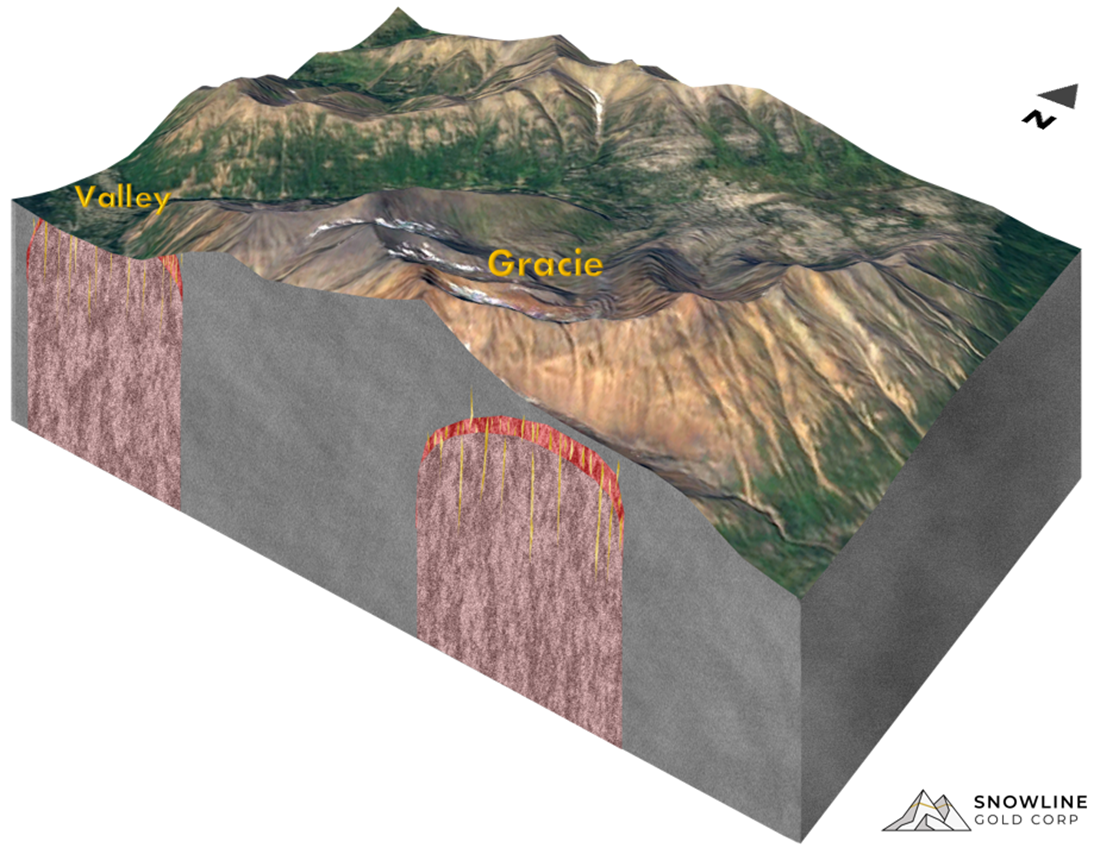 Figure 2 – Simplified schematic cut-away of Valley and Gracie subsurface geology. The large Au-Bi-Te geochemical anomaly and accompanying ZTEM geophysical patterns indicate the presence of a Cretaceous aged felsic intrusion (pink) with a related gold mineralizing system in the brittle carapace at the top of the intrusion (red). Fracture arrays that preferentially develop in the carapace are receptive hosts for gold-bearing fluids that form sheeted quartz vein arrays (gold lines). An intact mineralized carapace thus makes for an attractive exploration target.

Anomalous gold in soil samples up to 1.71 g/t Au were returned from 5.1 kilometers along a north-south trending ridge. All 43 samples within a central area roughly 1,600 m long by 800 m wide area averaged 0.49 g/t Au, with 8 results >1 g/t Au (Figure 3). Gold values in this core area have elevated bismuth (up to 287 ppm) and tellurium (up to 7 ppm) – a geochemical signature that is the same as Snowline’s Valley zone and is similar to other reduced-intrusion related gold systems.

Limited historical surface work at Gracie yielded mineralized rock samples in outcrop and float, with values of up to 57.0 g/t Au (quartz sulphide vein float). Prospecting by Snowline personnel in 2021 returned float grab samples of up to 6.9 g/t Au. Regional airborne z-tipper axis aeromagnetic (ZTEM) data from 2008 over the Gracie target area are resistive and indicate a felsic intrusion with hornfels country rock exposed on the surface and surrounding the intrusion (Figure 1). These geophysical results are consistent with initial observations of the Gracie target area and will be further verified by the Company.

Figure 3 – Soil and rock assay results from the core of the Gracie zone. Soil samples from within a 1,600 by 800 m area above the site of a suspected buried intrusion returned highly anomalous gold, bismuth and tellurium values, indicating an affinity to an intrusive source. The precise location and the depth to the top of the suspected causative intrusion have yet to be established.

Given the steep, rocky terrain and poor soil development (Figure 4), many soil samples from the Gracie area are classified as talus fines. Talus fines samples are produced by mechanical weathering of rocks are less modified by chemical weathering than typical soils. Some elements in talus fine samples may have stronger geochemical responses than soils from over a bedrock geochemical anomaly. Talus fine samples are also more susceptible to a sampling bias wherein more easily weathered mineralized zones, such as sulphide-rich veins, can contribute a larger portion of the talus fine sediment load than the more durable and relatively barren country rock, resulting in a concentration of associated elements like gold. 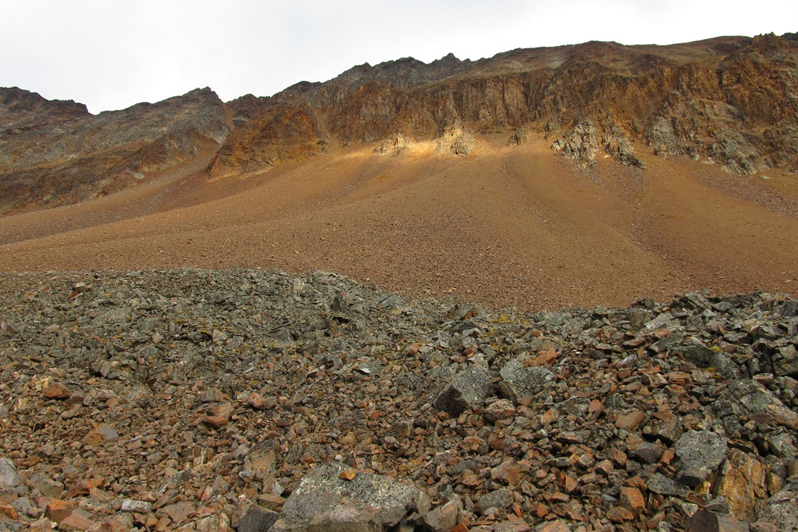 Figure 4 – Photograph of a gossanous ridge in the Gracie Zone, produced by oxidation of high-temperature hydrothermal alteration. Such alteration is presumably caused by a fertile sibling intrusion to the Valley stock present beneath Gracie. “Soil” samples collected from such areas are denotes as talus fines, as there is generally little to no development of a typical soil profile.

The proximity of Gracie to Snowline’s Valley zone, some 4 kilometers to the west, makes for convenient and cost-effective exploration in light of the Company’s planned 3,000 m drill program at Valley in 2022. Expansion of the 2021 Valley zone aeromagnetic survey is planned for coverage of the Gracie zone and the broader claim block using a helicopter-borne geophysics system. Additional surface sampling and geological mapping at Gracie will provide further context for magnetic and geochemical results to assist potential drill targeting. 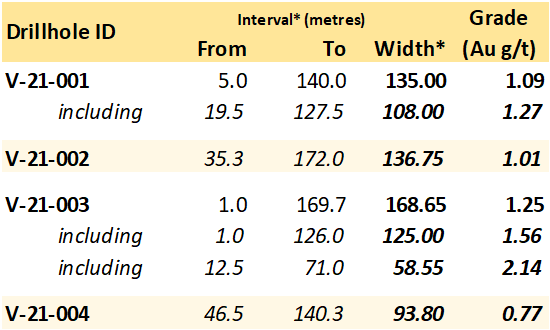 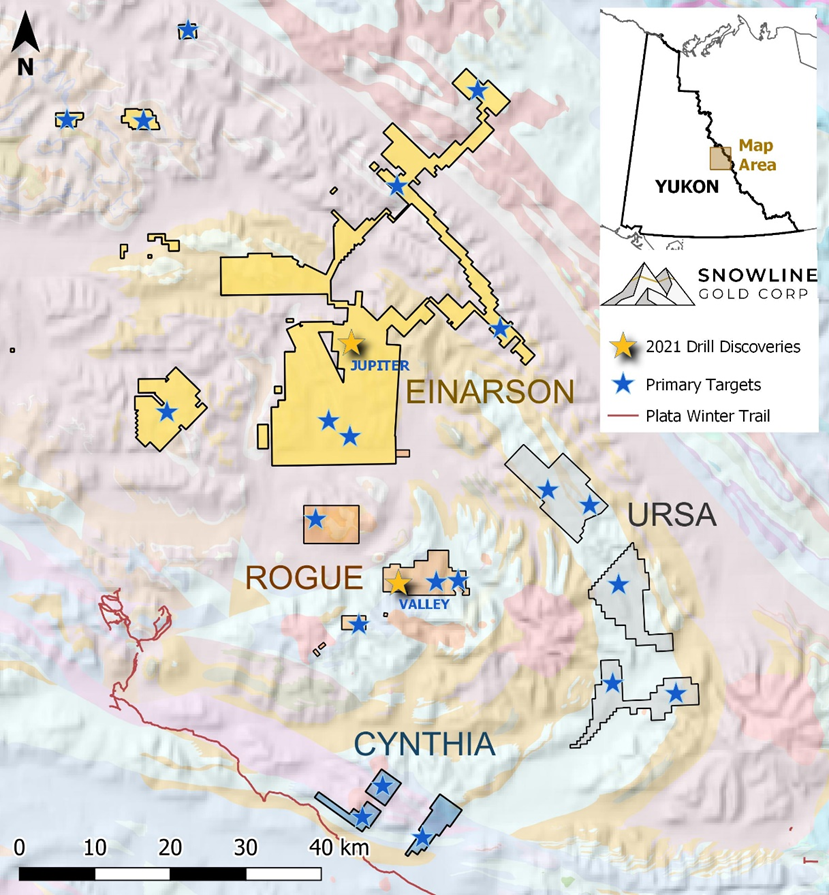 Figure 5 – Gracie zone location map in relation to surrounding Snowline Gold Corp. projects. Two significant drill discoveries made in Snowline’s first two drill programs (Jupiter and Valley) highlight the fertility of the district and the prospectivity of the Company’s additional targets, including Gracie.

The Company also announces that the Board of Directors has granted a total of 350,000 incentive stock options to various employees of the Company in connection with recent appointments. The options are exercisable for one share each at $0.80 per share for a period of five years from March 8, 2022 and are subject to the terms of the Company’s Stock Option Plan. Options are subject to vesting provisions of 20% every six months from the date of the grant.

Information in this release has been prepared and approved by Scott Berdahl, P. Geo., Chief Executive Officer of Snowline and a Qualified Person for the purposes of National Instrument 43-101.

Snowline Gold Corp. is a Yukon Territory focused gold exploration company with a seven-project portfolio covering >106,000 ha. The Company is exploring its flagship 72,000 ha Einarson and Rogue gold projects in the highly prospective yet underexplored Selwyn Basin. Snowline’s project portfolio sits within the prolific Tintina Gold Province, host to multiple million-ounce-plus gold mines and deposits including Kinross’ Fort Knox mine, Newmont’s Coffee deposit, and Victoria Gold’s Eagle Mine. Snowline’s first-mover land position provides a unique opportunity for investors to be part of multiple discoveries and the creation of a new gold district.

ON BEHALF OF THE BOARD

This news release contains certain forward-looking statements, including statements about the Company reviewing its newly acquired project portfolio to maximize value, reviewing options for its non-core assets, including targeted exploration and joint venture arrangements, conducting follow-up prospecting and mapping this summer and plans for exploring and expanding a new greenfield, district-scale gold system. Wherever possible, words such as “may”, “will”, “should”, “could”, “expect”, “plan”, “intend”, “anticipate”, “believe”, “estimate”, “predict” or “potential” or the negative or other variations of these words, or similar words or phrases, have been used to identify these forward-looking statements. These statements reflect management’s current beliefs and are based on information currently available to management as at the date hereof.