Kelowna, British Columbia–(Newsfile Corp. – April 4, 2022) –  Strathmore Plus Energy Corporation (TSXV: SUU.H) (OTC: SUUFF) (“Strathmore Plus” or “the Company“) is pleased to announce that Wyoming Uranium LLC, to be acquired by the Company, has begun the process of receiving a Permit to explore the Beaver Rim Uranium Exploration Project in central Wyoming. It’s the Company’s intent to complete a three-phase drilling program including 1) confirmation drilling in areas previously drilled by Strathmore Minerals in 2012, 2) drilling in areas previously explored in the 1970s, where notable concentrations of historical drill holes were located by aerial mapping and on-ground surveys, but the historical drill data is unavailable, and 3) drilling in underexplored, on-trend areas projected to have uranium mineralization. An application to drill is slated for submittal by late April 2022. Pending approval, the Company plans to begin exploratory drilling in the summer of 2022. The areas to be explored are shown on the accompanying Project map; they include the West Diamond, East Diamond, North Sage, and South Sage properties.

When asked why Strathmore Plus acquired and plans to drill its land on Beaver Rim, Mr. John DeJoia, Technical Advisor replied “When I was Chief Geologist and Director of Technical Services for Federal American Partners (Federal Resources and American Nuclear (FAP)), we always saw this Beaver Rim area as having great potential, but we never had the ability to completely explore our properties. The claims to be acquired encompass the paleo-channels that provided the conduit for the uranium mineralizing solutions originating from the south that deposited the Gas Hills uranium deposits. Cameco’s Blackstone, UPZ, Muskrat, and Peach properties lay just north of Strathmore’s claims. These neighboring properties have large concentrations of uranium mineralization and were planned previously for production, including by in-situ recovery. The uranium in the Gas Hills was transported through the channels underlying the Beaver Rim claims and there is a terrific potential to discover uranium with the Company’s exploration program slated to begin in summer 2022.” The following details the areas to be explored by Strathmore Plus.

The West Diamond property lies immediately south and adjacent to Cameco’s Peach deposit, explored by American Nuclear, for which Cameco reported (2002 Annual Report) mineral reserves and resources of 7.0 million and 2.6 million pounds of uranium, respectively (tonnage and grade % not stated). Previous exploration by American Nuclear encountered uranium mineralization on the West Diamond property. Most recently exploration was completed by Strathmore Minerals in 2012, which drilled 12 holes, encountering mineralization indicative of stacked-roll front systems. Strathmore Plus intends to target the areas where uranium was previously encountered, with the goal of extending the roll-fronts into areas of untested ground.

The East Diamond property lies immediately south and adjacent to Cameco’s Muskrat deposits, which were extensively explored by FAP in the 1970-80s. In 1984, FAP completed final resource estimates for the properties including the Muskrat (and Jasper) claim group, totaling 2,146,317 tons grading 0.134% eU3O8 for 5,735,891 pounds uranium. Most recently limited exploration was completed by Strathmore Minerals in 2012, which drilled 3 holes that encountered low-grade mineralization. Strathmore Plus intends to target the previously defined southern Muskrat trends where they are noted to cross the property from Cameco’s claim group to the north.

The North Sage property lies along the projected southern extent of the Blackstone-UPZ-Allegretti uranium trend. The property was partially explored by American Nuclear in the 1970s. In their 1984 report, FAP completed final resource estimates for the Blackstone-UPZ claim groups, totaling 3,163,354 tons grading 0.142% eU3O8 for 9,008,317 pounds. Immediately south, the Allegretti portion of the mineralized trend was drilled in the 1960-70s by several companies, and most recently in 2012 by Strathmore Minerals which encountered stacked roll-fronts. In 1976, Dames and Moore estimated a potential resource on the Allegretti claims of 753,000 pounds averaging 0.19% eU3O8. These noted uranium roll-fronts are projected to extend south onto the North Sage property.

The South Sage property lies further south along the projected southern extent of the Blackstone-UPZ-Allegretti uranium trend. The property was previously explored by American Nuclear in the 1970s, which discovered a mineralized trend that extends across the property. Resource estimates for this property have not been discovered in the available historical files.

Mr. Terrence Osier, VP of Exploration for Strathmore Plus stated “The permitting process will include a review of potential archaeological sites and possible impacts on any threatened and endangered species of flora and fauna. The Company will post reclamation bonds for surface and hole abandonment costs. Exploration permits were issued in the past for drilling atop Beaver Rim, where we encountered uranium mineralization. The personnel in charge of permitting at the local offices of the Bureau of land Management and Wyoming Department of Environmental Quality are very familiar with exploration permits and the Company looks forward to working with them to receive a permit to explore in a timely fashion. I’m excited to get back out to the Gas Hills-Beaver Rim area to explore for and hopefully discover significant uranium mineralization, of similar size and extent as historically mined in the Gas Hills, where over 100 million pounds of uranium was previously produced.” 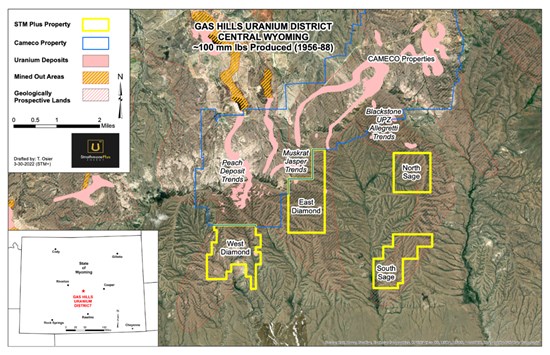 The above reported historical estimates were completed prior to implementation of the NI 43-101 requirements. A Qualified Person has not completed sufficient work to classify the historical estimates mentioned in this news release as current mineral resources or reserves. It should also be noted that the extent of mineral resources or reserves on adjacent properties may not be indicative of the mineralization that is present or potentially to be discovered on Strathmore’s adjacent Beaver Rim properties.

About Strathmore Plus Energy Corp.

Strathmore Plus is a uranium exploration company, focused on in-situ recoverable uranium deposits in the State of Wyoming.

The technical information in this news release has been prepared in accordance with the Canadian regulatory requirements set out in National Instrument 43-101 and reviewed on behalf of the company by Terrence Osier, P.Geo., Vice President, Exploration of Strathmore Plus Energy Corp., a Qualified Person.

Cautionary Statement: Certain information contained in this press release constitutes “forward-looking information”, within the meaning of Canadian legislation. Generally, these forward-looking statements can be identified by the use of forward-looking terminology such as “plans”, “expects” or “does not expect”, “is expected”, “budget”, “scheduled”, “estimates”, “forecasts”, “intends”, “anticipates” or “does not anticipate”, or “believes”, or variations of such words and phrases or state that certain actions, events or results “may”, “could”, “would”, “might” or “will be taken”, “occur”, “be achieved” or “has the potential to”. Forward looking statements contained in this press release may include statements regarding the future operating or financial performance of Strathmore Plus Energy Corp. which involve known and unknown risks and uncertainties which may not prove to be accurate. Actual results and outcomes may differ materially from what is expressed or forecasted in these forward-looking statements. Such statements are qualified in their entirety by the inherent risks and uncertainties surrounding future expectations. Among those factors which could cause actual results to differ materially are the following: market conditions and other risk factors listed from time to time in our reports filed with Canadian securities regulators on SEDAR at www.sedar.com. The forward-looking statements included in this press release are made as of the date of this press release and Strathmore Plus Energy Corp. disclaim any intention or obligation to update or revise any forward-looking statements, whether as a result of new information, future events or otherwise, except as expressly required by applicable securities legislation.

To view the source version of this press release, please visit https://www.newsfilecorp.com/release/119117