Vancouver, British Columbia--(Newsfile Corp. - September 8, 2022) - Sun Summit Minerals Corp. (TSXV: SMN) (OTCQB: SMREF) is pleased to announce that it has commenced drilling at the 33,000 hectare Buck Project, central British Columbia, where the Company has an option to acquire a 100% interest.

"This is a very exciting drilling campaign at the Buck Project where we'll be testing the potential lateral extension of mineralization proximal to Buck Main, as well as testing other distinct prospective targets for possible new discoveries", stated Sharyn Alexander, Sun Summit's President. "The mineralization at Buck Main remains open for potential expansion, both laterally and at depth, while additional underexplored zones of near-surface disseminated gold-silver-zinc mineralization provide potential for new discoveries to augment and expand the overall size and scale of the 33,000 hectare Buck Project."

The primary objective of the over 5,000 metre planned drill program is to investigate the strike extent and the limits of near-surface gold-silver-zinc mineralization. Epithermal-related alteration and mineralization has been intersected in drill holes covering a strike length of over a 1 kilometre (Figure 1) and the recent discovery of strong gold-silver-zinc mineralization to the west of previous drilling (e.g., 1.09 g/t gold equivalent (AuEq) over 73.5 metres including 2.20 g/t AuEq over 10.3 metres; BK22-070, see news release dated May 3, 2022) opens the exploration potential significantly to the west where it remains open. Based on updated 3D geological modelling, drilling will first target the extension of these mineralized zones (Figure 1). Additional targets to the north and east of Buck Main may also be tested.

The current drill program is following up on several successful drill campaigns at Buck Main totalling 75 diamond drill holes for over 27,000 metres. 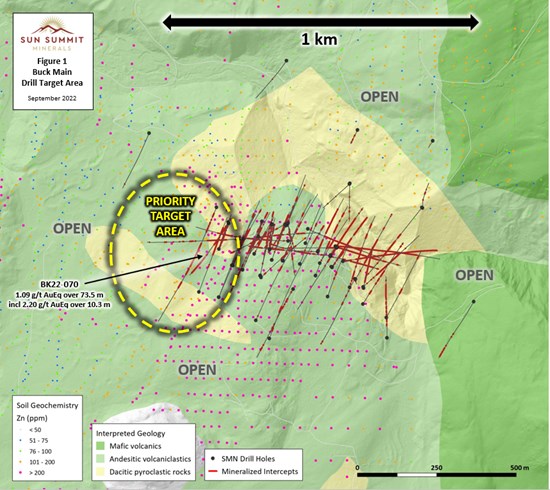 A total of 1,674 soil samples, 30 silt samples, and 52 rock (grab) samples were collected at the Buck project in 2022. Soils samples were taken along 400 metre by 100 metre spaced survey grids, as well as from infill grids at the IRK and Eagle Eye targets guided by real-time results from a portable X-Ray fluorescence (pXRF) spectrometer (see news release dated August 31, 2022). Samples are being sent to the lab for additional geochemical analysis.

An IP geophysical survey has been planned over both the IRK and Eagle Eye targets to investigate potential zones of strong sulfide-related mineralization (see news release dated August 31, 2022). Survey lines were planned based on new geological mapping and initial pXRF-based geochemical results from soil samples collected at each target area. The ground-based geophysical survey will commence shortly.

The Company also announces it has retained SmallCap Communications Inc. of Vancouver, B.C. to provide social media management and communication services for a one year period commencing July 12, 2022. SmallCap will be paid a fee of $4,000 per month (to be paid from the Company's working capital) for its services during an initial trial period of three months, following which the fee increases to $4,500 per month for the remaining nine months for a total of $52,500. After the expiry of the initial one year term, SmallCap's retainer will continue on a month-to-month basis.

SmallCap is a specialized digital marketing and social media management agency providing services to boost public companies' investor awareness and engagement. SmallCap was founded in January 2013, and is owned, by Rebecca Kerswell. SmallCap utilizes her proprietary methods that allow companies to reach and network with their investors through the top social media networks: Facebook, Twitter, LinkedIn, Instagram, and Telegram.

Ms. Kerswell has a BBA from Camosun College in Victoria, B.C. and is arm's length to Sun Summit. The Company understands that neither Ms. Kerswell nor SmallCap currently holds any Sun Summit shares.

The Company has granted SmallCap a stock option to purchase 50,000 shares at $0.25 per share until the earlier of September 7, 2024 and the termination of SmallCap's retainer.

This news release has been approved by Sun Summit's Senior Advisor, Robert D. Willis, P. Eng. a "Qualified Person" as defined in National Instrument 43-101, Standards of Disclosure for Mineral Projects of the Canadian Securities Administrators.

Some data disclosed in this news release (e.g., Figure 1) relating to sampling and drilling results is historical in nature. Neither the Company nor a qualified person has sufficiently verified this data and, therefore, investors should not place undue reliance on such data. Mineralization hosted on adjacent, nearby, or geologically similar properties is not necessarily indicative of mineralization hosted on the Company's property.

Sun Summit is engaging with First Nations on whose territory the Buck Project is located and is discussing their interests and identifying contract and work opportunities, as well as opportunities to support community initiatives. The Company looks forward to continuing to work with local and regional First Nations as the project continues.

Sun Summit Minerals is an exploration company focused on expanding its gold, silver, and zinc discovery at its flagship 100% controlled Buck Project located in north-central British Columbia near the town of Houston.

The Company is exploring multiple high priority targets through systematic exploration campaigns. The project benefits from excellent developed infrastructure and year-round drilling access. The Buck Project has high-grade and bulk-tonnage gold, silver, and zinc potential and is located in an established mining region that includes many former operating mines and current exploration projects.

Sun Summit is committed to environmental and social responsibility with a focus on accountable development to generate positive outcomes for all stakeholders.

Further details are available at www.sunsummitminerals.com.

Statements contained in this news release that are not historical facts may be forward-looking statements, which involve risks, uncertainties and other factors that could cause actual results to differ materially from those expressed or implied by such forward-looking statements. Factors that could cause such differences, without limiting the generality of the following, include: risks inherent in exploration activities; the impact of exploration competition; unexpected geological or hydrological conditions; changes in government regulations and policies, including trade laws and policies; failure to obtain necessary permits and approvals from government authorities; volatility and sensitivity to market prices; volatility and sensitivity to capital market fluctuations; the ability to raise funds through private or public equity financings; environmental and safety risks including increased regulatory burdens; weather and other natural phenomena; and other exploration, development, operating, financial market and regulatory risks. Except as required by applicable securities laws and regulation, Sun Summit disclaims any intention or obligation to update or revise any forward-looking statement, whether as a result of new information, future events or otherwise, except as required by applicable securities laws.

Neither the TSX Venture Exchange nor the Investment Industry Regulatory Organization of Canada accepts responsibility for the adequacy or accuracy of this release.

To view the source version of this press release, please visit https://www.newsfilecorp.com/release/136301

Sun Summit Completes 3,000 Metres of Drilling at the Buck Property, Central BC