Nearly half of U.S. consumers have had to pay at least one emergency expense in the last 90 days

SAN FRANCISCO, Aug. 29, 2022 /PRNewswire/ -- LendingClub Corporation (NYSE: LC), the parent company of LendingClub Bank, America's leading digital marketplace bank, today released findings from the 13th edition of the Reality Check: Paycheck-To-Paycheck research series, conducted in partnership with PYMNTS.com. The Emergency Spending Edition examines the financial lifestyle of U.S. consumers who live paycheck to paycheck, the factors that cause financial distress and the impact of financial stressors, such as emergency spending, on their ability to manage expenses and put aside savings. 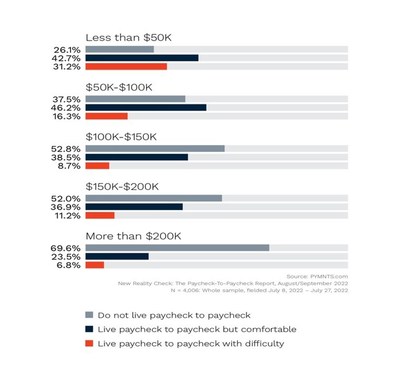 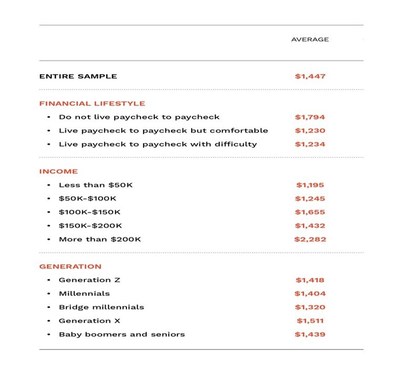 Figure: Average cost of the emergency expense (per expense), by demographic

In May 2022, the Federal Reserve released its annual report, the "Economic Well-Being of U.S. Households in 2021," which is often used as a measurement of a household's financial well-being. Since 2013, these annual reports have tracked consumers' stated ability to afford a theoretical $400 emergency expense. While the economy has evolved rapidly over the past nine years, that $400 benchmark has remained stagnant, raising the question: Should that figure be updated to reflect today's reality?

The recent LendingClub and PYMNTS' data finds that this is not just a thought exercise: Nearly half (46%) of U.S. consumers have faced at least one unexpected expense* in the last 90 days, and 56% of emergency expenses cost more than $400. In fact, consumers' average emergency expense was approximately $1,400.

"The need to update the $400 emergency expense benchmark is evident in this report," said Anuj Nayar, LendingClub's Financial Health Officer. "Inflation in the last year, let alone the last decade, has made it much more difficult for consumers to save while staying on top of their expenses. Not only are consumers saving less every month, but they are likely to encounter an emergency expense, if not multiple, putting them at a greater risk for increased financial hardship. This fact paves a financially difficult road ahead for consumers."

The Impact of Emergency Expenses

The data finds that emergency expenses averaged approximately $1,400. High-income earners and consumers not living paycheck to paycheck reported significantly higher expenses overall. With rising inflation and the increased cost of emergency expenses, the Federal Reserve's indicator of financial distress for over a decade is losing relevance.

The research also finds that in the last 90 days, 46% of consumers were forced to pay for at least one unexpected expense, with consumers apt to face multiple. There are also significant differences across generations and income brackets, with middle-aged and high-income consumers more likely to have faced emergency expenses. In each case, more spending power may be attributed to having more possessions that can generate unexpected expenses. While 53% of bridge millennials and 51% of millennials faced unexpected expenses in the last 90 days, only 45% of Generation Z consumers and 40% of baby boomers and seniors did so. Additionally, 56% of consumers earning more than $200,000 annually were forced to pay for at least one emergency expense, whereas 39% of those earning less than $50,000 annually had to do the same. Higher income consumers were also more likely to face more than one unexpected expense.

Common emergency expenses include everything from car repairs to health-related and housing and relocation expenses. At 30%, car repairs are the most common unexpected expense, and consumers paid an average of $1,008. The next-most common expenses are health-related, with 21% of consumers facing at least one health-related emergency expense and spending an average of $1,361. Housing- and relocation-related expenses had the highest average cost at $2,042, and 19% of consumers faced this type of expense.

The report finds that 52% of consumers used cash or money in their accounts to pay for unexpected expenses, and 23% used their credit cards and paid the balance in full at the end of the month. However, 37% used financing alternatives to cover at least part of these expenses, with 18% in total using a credit card and carrying a balance.

Emergency expenses are often well in excess of the $400 benchmark. In order to manage these expenses, the report indicates that Americans will need to increase their savings rate at a time when many are financially struggling and are seeing their savings drop by nearly half.

*Unexpected or emergency expenses are defined as certain types of unanticipated expenses of $100 or more that consumers were forced to pay for in the last three months. These may include surprise medical expenses, tax bills, and urgent home or car repairs, but do not include spending on travel, electronics, clothing or other equipment.

New Reality Check: The Paycheck-To-Paycheck Report: The Emergency Spending Edition is based on a census-balanced survey of 4,006 U.S. consumers conducted from July 8 to July 27. The Paycheck-To-Paycheck series expands on existing data published by government agencies such as the Federal Reserve System and the Bureau of Labor Statistics to provide a deep look into the elements that lie at the backbone of the American consumer's financial wellness: income, savings, debt and spending choices. Our sample was balanced to match the U.S. adult population in a set of key demographic variables: 51% of respondents identified as female, 31% were college-educated and 36% declared incomes of over $100,000 per year.

LendingClub Corporation (NYSE: LC) is the parent company of LendingClub Bank, National Association, Member FDIC. LendingClub Bank is the leading digital marketplace bank in the U.S., where members can access a broad range of financial products and services designed to help them pay less when borrowing and earn more when saving. Based on more than 150 billion cells of data and over $75 billion in loans, our advanced credit decisioning and machine-learning models are used across the customer lifecycle to expand seamless access to credit for our members, while generating compelling risk-adjusted returns for our loan investors. Since 2007, more than 4 million members have joined the Club to help reach their financial goals. For more information about LendingClub, visit https://www.lendingclub.com.

LendingClub to Participate in Citi's 2022 FinTech Conference on November 15